After all the hype, particularly last season, regarding the major (though seemingly friendly) rivalry between Petter Northug and Marcus Hellner, it’s been interesting to have it all sort of fizzle out this year. Northug’s been struggling with getting back into form after being sick, and Hellner also struggled somewhat during the Tour de Ski.

However, Daniel Rickardsson has really stepped up and provided the Swedes with some quality results so far. Here’s a comparison of the two Swedes distance results, using the percent behind the median skier in each race: 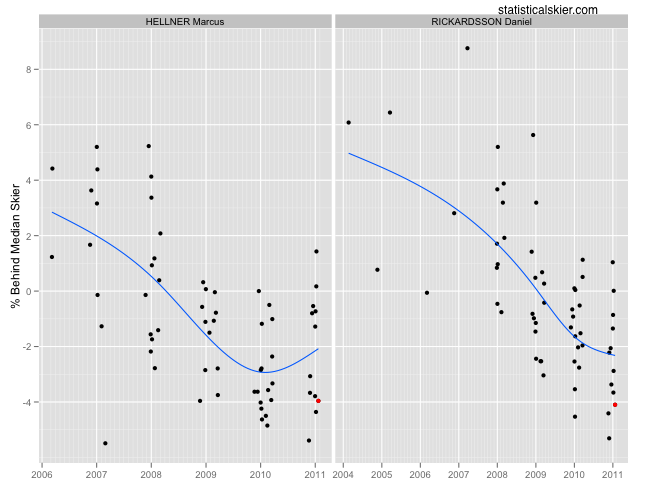 This past weekend’s race is in red. While Hellner’s trend line is pushing upwards this season, I wouldn’t panic much. See how his results this season are fairly cleanly divided into two groups, good and bad? Well four of those bad races are from the Tour, which makes me suspicious about whether they are really indicative of his form or whether they’re specific to him struggling with that particular multi-day event.

In any case, Hellner’s good races are right in line with his better performances last year, so I think he’ll be a significant threat as the season goes on.

Finally, one thing that’s becoming apparent is how much more movement there is on the men’s podium than the women’s this season. Mostly that’s due to Marit Björgen winning nearly everything in sight, but here are some numbers to chew on.

Including the Tour de Ski, 13 different men have won various events versus only 7 different women. If we remove the Tour, where Björgen didn’t race, these numbers drop down to 10 for the men and 5 for the women. In regular WC races, there are twice as many men with wins than women.

Of the 12 total distance events so far this season (including the Tour) Björgen and Kowalczyk have won 9 of them. On the men’s side, only Dario Cologna has 3 wins, followed by Hellner with 2. In fact, the first five men’s distance events had five different winners!