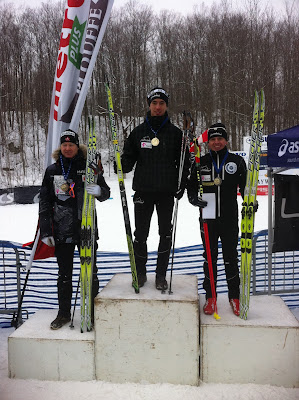 Yesterday’s 2nd place in the 20km skate. Academy podium sweep!
Last Wednesday, Graham, Drew, Jeffries and I jumped on a plane and headed to Montreal for what would be the first of our three week NorAm mini-tour race series. Travel went very smoothly and we arrived at Hotel Cheribourg in Orford with relative ease.
The first of the races was a 4km classic prologue. My classic skiing is coming along, and so is my sprinting, but it was apparent after being 7th and 30 seconds back over 4km that there is still lots of work to be done! The course was very flat, and some of the guys were flirting with the idea of double poling it. Everyone ended up using classic skis, but it was a real back burner. My arms and back have never seized up so much in a 10 minute period!
The following day we raced a 10km classic. It was a single 10km loop, which is pretty uncommon now days. Usually it would be multiple loops of a smaller distance. I quite enjoy the single loop format though, I find there is more variety in the course and it doesn’t get repetitive.  The starts were 15 second intervals, which made for some big advantages the further back you started. Because it was only 15 seconds, you could see the guy ahead of you the whole time, and reeling them in was easier then say, 30 second intervals (out of sight, out of mind). It was pretty apparent in the last 5 starters, it went me first, then Dave Greer, Stef, Drew and Nish. The Nish caught Drew, they caught Stef and Stef caught Dave and they all closed in on me in the finishing straight. So we finished in reverse order, all 15 seconds apart. I think for these types of races, they should stick to the 30 second intervals. Overall I was happy with the day. I felt strong and like I was skiing technically well. It didn’t take a lot out of me, and after the two classic races I had managed to still be within 2 minutes of the lead. (Still a sizable gap, but I could work with it)
The last race was a 20km (4x5km) skate pursuit start. This meant that your times from the two previous days were added together (plus any time bonuses from the prologue) and the overall leader went out first, and everyone else started based on their total time back from him over the last two days. It means that the first one across the finish like is the overall winner for the weekend. It is one of my favorite formats, because so much can change. You know exactly how much time you need to make up, and exactly where you finish when you cross the line. I ended up starting seventh (1:58 back of Nish, the leader). I had lots of people to catch, and some serious time to make up. I started hard and caught the two guys in front of me fairly quick. Then settled into pace and tried to eat up as many seconds as I could. I got to within 10m of Stef on the third lap, and once he saw me closing in he put on the jets and I was never able to finish the job of reeling him in. The good news is I moved from 7th to 4th, and had the second fastest time of the day behind Nish! This was my first NorAm podium of the year, and one of my better races. It was a great way to end the weekend, and gave me some good experience to put to use over the next two mini-tours.
I am back in Canmore after a long travel day yesterday. After the race we headed to Montreal to catch our flight, and eventually made it back to Canmore at 2:00am. It was an unpleasant shock to wake up to -35 C this morning…
I will head out for a ski eventually, and keep it pretty relaxed over the next two days. We head to Kelowna on Wednesday for the next mini-tour.
Thanks for checking in!
Pate
PS- Congrats to Alex on his big win today at U23’s!! Pretty pumped to see all those solid U23 and Junior results over the past week!

A good weekend of racing