I was looking for this event since last year when I first tried classic skiing. Last year I was sick and did not do it. Maybe it was good that I did not, because at that time I was training on my own and was trying to figure out the technique also on my own. I remember I could not even do most of the hills in Wirth without slipping. With that the long race with so many hills could have turned into a nightmare. After a year with Vakava I am better in classic skiing, but I was still worryed as Seeley was going to be my first classical race with so many hills.
After the start I soon found myself in the end of the lead pack consisting of about a dozen skiers. Because of the snowfall the night before the tracks were soft, filled with new snow and slow. Although there were 4 tracks set everybody lined up in just one as it was much faster to go in the track packed by other skiers. I was able to stay with the lead pack until the steep hill at about 10K. At the top f the hill I found myself way behind and filled with lactate. After that I cooled down my ambitions and decided to ski at controlled pace and have fun. I already did the Birkie twice so it was my third time on the trail, however this time I enjoyed it much more without the crowds.
From about 15K I was skiing with 3 other skiers. They were much more efficient striders on uphills. I was not slipping, but they somehow managed to glide twice longer than me on each stride! So they were going away on uphills, however I was faster double poler and then was catching up with them on the flats. I guess if figure out the striding technique I would be much faster in classic races. 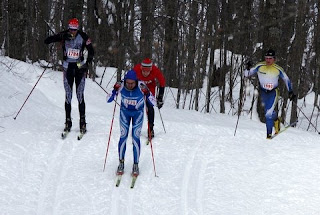 We were going this way until OO where the course flattens and I went in the lead of our small group. There are still a number of hills there and one needs to stride so I could not get away from these guys, however I was staying ahead until about 36K. There was some long hill there and the 3 skiers passed me. At that point I was too tired to catch them up. Probably I started the race too hard. It seemed to me that I was still going fast, but I lost more than 2 minutes to the guys and when I looked up my heart rate after the race it appeared that I was going below 130 bpm for the last K!
Before the race I looked up last year’s results and thought it would be great to finish in top 20. I ended up being 12, and although there were not as many elite skiers this year, I am still very happy with this result.
22K: 1st Dave B
24 Kevin
42K: 12th Eugene
16 Andrew
23 Ryan
26 Mark