Like last time a look at the performance of skiers from different nations in this year’s TdS and last year’s.  As always, click through for full versions, as these are somewhat large: 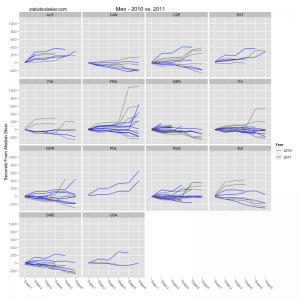 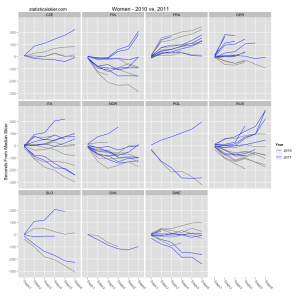 The Russian men actually seem to be doing about the same, with a handful of skiers doing well early (sprinters, mostly) only to drop out, leaving a few mid-pack skiers.  The main difference for Norway is Northug being somewhat off his game; the rest of the Norwegian men are roughly where they were last year.  The German team’s struggles are clear, although mostly that’s been manifested by them dropping out rather than continuing and skiing really slowly.

The addition of Kalla and Haag, Swedish women are having a much, much stronger Tour this year.  The Russian women are almost a complete disaster, although I’m less familiar with their various skiers, so I’m not sure how to judge differences in who they decided to send to the Tour. If it weren’t for Krista Lahteenmaki, the Finnish women would also look like a complete disaster.  It’s also interesting to compare Kowalczyk’s progress this year to last.  With the obvious caveat that the stage formats weren’t exactly the same last year, she continued to pile on time relative to the median skier past Stage 4 last year.  This year she’s basically flatlined.