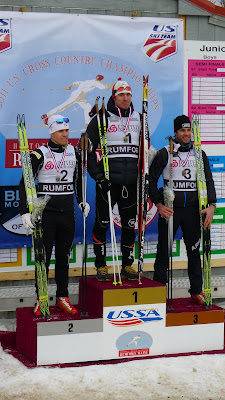 Today marked the final day of the US National Championships in Rumford, Maine and the MODsters finish in fine form. Torin raced his way to the top of the podium once again and Sam finally put in the race we have been waiting for by being right in the mix all through the heats to take the 9th spot in a very strong field.

All week I have been seeing the guys’ energy right where it needed to be and building coming into the last race today, the skate sprint. Conditions were very fast, so it was not a great course to break up the field. In the men’s heats the racing was fast and tight right from the gun to the tape with most of the heats involving lunging finishes with the top two or three spots being decided by hundredths of seconds. No one was giving any quarter today. 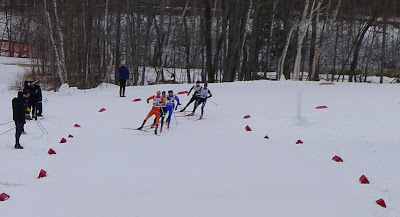 Torin leading the A final with Simi Hamilton and Lars Flora in hot pursuit.

Torin skied relaxed and smoothly in each heat and felt like he could control the pace and stay in front as needed, always having another gear. Technically I feel Torin has come a long way this year and even in the last two months. He is a vision of economy in motion, maximizing glide in each stride!

After a fair qualifier Sam stood in 20th place but he really laid down his strongest races in each heat. He managed to out sprint to the line, the day’s top qualifier, Colin Rogers in the quarter final: An ample demonstration of Sam’s real speed. The most exciting thing for me was to see how well he could ski in subsequent heats. He was able to mix it up with the best sprinters in the country all the way through his B final. This is a level of endurance that Sam has not had in previous years. I have known he had this in him and still see room for improvement as he regains fitness after the mono bout.

My hat is off to Lars Flora who put in, perhaps, the overall strongest results of the week with his consistent and impressive finishes in each of the 4 races here. Great job Lars. Start packing your bags.

Former MOD skier, Sadie Bjornsen wrapped up a great week with a third place in her sprint race today after a win in the 10km classic 3 days ago. Had she not tried to lead every heat, like she used to do as a J1, I think she’d have had herself another first place today. By adopting this tactic she was not able to use her prodigious finishing kick. None the less a nice week for her too.

FYI: We raced on Toko HF Blue mixed with Toko Cold Powder as the wax layer with an over lay of Skigo C55/C99 liquid. Toko Jetstream blue and red block mix was our second choice.

With Skate Sprint Victory, Koos Doubles Up in Rumford