To mark last weekend’s World Cup races in Estonia, I thought a post on Andrus Veerpalu would be in order.

I’ve heard it said, from various sources, that Estonian skier Andrus Veerpalu<1 has a particular ability to show up at major competitions (i.e. Olympics, World Championships) and significantly over perform, based on his results that season.  Naturally, this observation is often accompanied with little suggestive commentary on his pharmacological habits.

My interest in this has little to do with doping allegations, which I doubt I’d be able to shed any light on.  Rather, I’m intrigued by the notion of a skier that is “clutch”.  I’m borrowing that term from American baseball or basketball, where it refers to players who appear able to perform at a higher level when the stakes are higher.  In nearly every case where I’ve read a serious statistical examination of this topic in those sports, it has been found to be a figment of our collective imaginations (though this conclusion remains somewhat controversial).

I’m not going to attempt a large scale debunking of this concept in skiing at the moment, as that’s a pretty big project.  Instead, let’s focus on two particular skiers, Andrus Veerpalu and Oxana Jatskaya (KAZ). 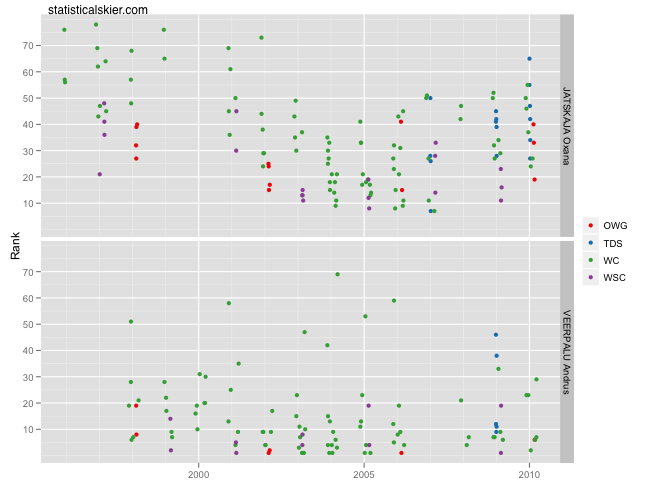 I’ve plotted the results for each skier above (excluding this season).  I’m keeping things simple at the moment, so the y axis is simply rank, or the place they finished in a distance event.  I actually omitted some of Veerpalu’s early career so as to focus in on when he’s been the fastest.

Let’s talk about Veerpalu first.  The first thing to observe is that the guy sometimes has really crummy races, occasionally finishing as poorly as 60th or so.  Now, in that respect, Veerpalu is exactly the same as nearly every other skier out there.  Everyone from Kris Freeman to Petter Northug have some really horrible days from time to time.

But, are Veerpalu’s results at the Olympics or World Championships consistently (or even frequently) very different from his results from the rest of the season?  Let’s walk through the relevant seasons:

So.  When Veerpalu “steps it up”, he appears to transform himself from “merely” a top ten skier to a podium finisher, but just as often Veerpalu hasn’t really over performed at major events at all.  While I’d certainly call the ability to step things up from a top ten caliber performance to a podium level performance a major achievement, it’s not something that I’d consider suspicious, at least from a statistical perspective.

How about Oxana Jatskaya?  She’s someone who wasn’t really on my radar until I started looking specifically for people who did considerably better at Olympics or World Championships than normal.  She hasn’t had as much success as Veerpalu, as her best seasons saw her just breaking into the top ten.

Our real interest, though is in the difference between her results at major competitions and regular WCs.  Not always, but in five seasons (1997, 1998, 2002, 2003, 2009) it seems that her WSC or OWG results display near complete separation from her WC results from the same season.  In several other years she raced at more comparable levels in both regular WC’s and at major championships.

My reason for pointing this out is absolutely not to accuse Jatskaya of anything.  There are all sorts of perfectly reasonable explanations.  My point is to show you what sort of data I think of when someone tells me that a skier regularly over performs at major events.  What I think of is something like what we’re seeing in several of Jatskaya’s seasons, and I just don’t see it in Veerpalu’s.