Now that the entire Tour is in the books, here’s how it played out, at least the big picture: 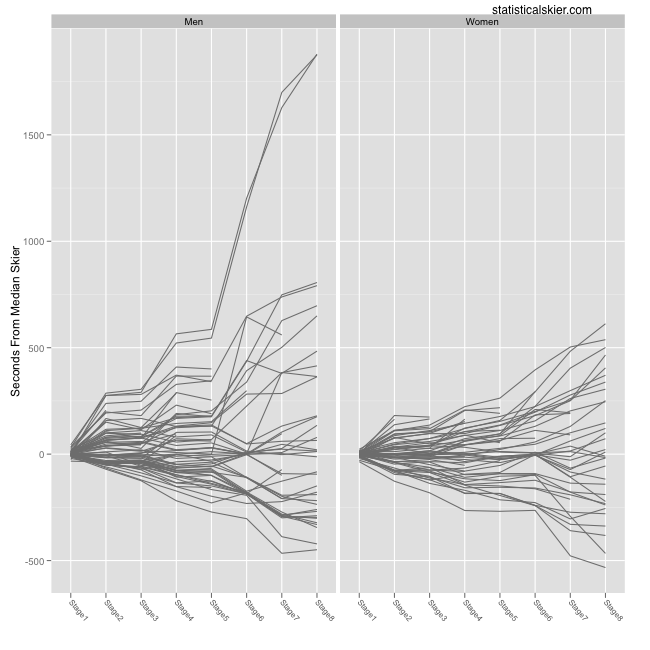 I have to say, good job to Fransesc Soulie (AND) and Callum Watson (AUS) for hanging in there, despite being way off the back.  Eight races in ten days is a tough feat, even for the folks at the back, so everyone who made it to Val di Fiemme deserves a pat on the back.

Kowalczyk was rarely seriously tested in this Tour.  The Italians pulled reasonably close to her after Stage 6, but the Pole rebounded in Stages 7 and 8.  Therese Johaug’s stunningly good final two stages, propelling her all the way into second place are readily apparent as well.  On the men’s side, Dario Cologna pulled away after Stage 4 and despite yielding some time to Petter Northug on the final climb held on for the win.  Northug’s big jump into second place after Stage 7 came largely on the shoulders of the 90 bonus seconds he racked up that day.

Finally, here’s a look at the top twelve skiers from this year’s Tour (who also participated in last year’s Tour) comparing their results from each year (click through for full versions): 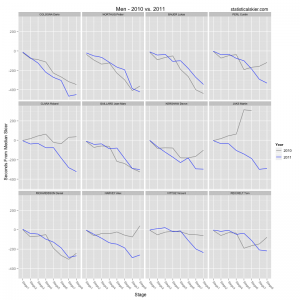 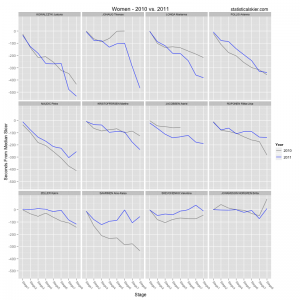 Martin Jaks fell apart after Stage 4 last year and didn’t finish.  Quite a change, huh?  You can also see why I’m of the opinion that Alex Harvey actually had a better Tour, relative to last year, than Devon Kershaw did.  Of course, podium finishes don’t show up when I’m measuring things using “seconds back from the median skier”, and that should certainly count for something as well.  But strictly on a basis of time, relative to the field, Harvey saw a bigger improvement than Kershaw did.

Vincent Vittoz finally seemed to be regaining some form for the final few stages.  Tom Reichelt’s performance over Stage’s 5-8 are basically mirror images between the two years.  Last year he had a strong day and jumped up only to slide backwards for the remainder of the Tour.  This year was exactly the opposite as he steadily moved up after Stage 5.  Curdin Perl is another skier who last year faded over the final few stages but this year moved up.  Roland Clara was dramatically better this year, particularly over the second half of the Tour.

As for the women, the first thing that stands out is obviously Therese Johaug.  She wasn’t skiing terribly last year but dropped out after Stage 6 while essentially right in the middle of the field.  (I don’t recall why that was, illness perhaps?)  This year started off about the same, only she managed to hold her position for Stages 4-6 rather than slipping back.  Then of course she put in two stunningly good efforts to launch herself up to second.  It’s easy to be a cynic about doing well in Tour’s overall standings given the amount of attrition the event sees, but anyway you look at it, Johaug had two phenomenal days.

Marianna Longa probably would have liked to challenge Kowalczyk for the overall win, but she still had a very strong Tour, particularly over the second half.  At the other end of the spectrum is Aino-Kaisa Saarinen, who had a rather abysmal Tour.

Coming up in part two are the plots comparing 2010 to 2011 performances by nation, as well as alternate versions of these plots using seconds behind the winner, which happens to highlight a few things that are hard to see here.

Randall Wraps Up First Tour with 23rd on the Alpe, 21st Overall