Continuing on from my previous post, let’s move on to look at how different nations fared compared to last year’s Tour (click through for full versions): 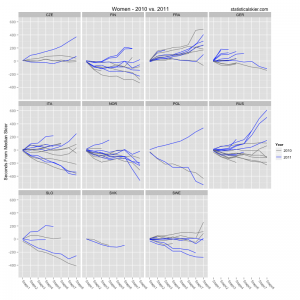 The German men struggled, but mainly that shows up here as skiers dropping out rather than performing poorly.  In fact, the one German man who made it all the way through the Tour performed about as well as the team did last year.  The Swiss men are obviously somewhat improved, with Cologna winning and Curdin Perl skiing about as well as Cologna did last year.

The Russian men actually did about the same.  They had lots of sprinters abandon the Tour, as they did last year, and those that finished ended up right where they were last year.  One other piece that stands out is that Kris Freeman really only had one bad stage (reportedly due to poor skis) but otherwise he was holding steady in the middle of the field.

The women saw a much improved showing by the Swedes, despite losing Anna Haag after Stage 7.  The German women, like the men, were decimated early on, with many skiers dropping out.  Interestingly, this doesn’t seem radically different than what happened last year, either.  The big losers here are clearly the Russian women, who by any reasonable measure had a terrible Tour compared to 2010.  Lots of abandoned skiers and several of those that did finish were well off the back.

I mentioned in my earlier post this morning that if you graph some of the top individual’s performances using time behind the leader rather than time behind the median skier, some different things pop out: 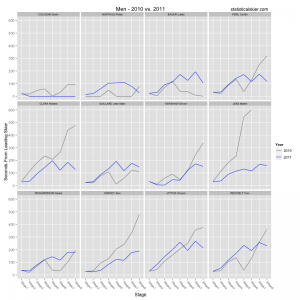 First of all, last year Stage 5 was the one packed with tons of bonus seconds that saw lots of big jumps, whereas this year Stage 7 arguably played that role.  Both years, Lukas Bauer was  ~100 seconds back after four stages, but he wasn’t able to claw his way back to the front this time around.  Daniel Rickardsson saw a slightly different journey that ended in roughly the same spot, just shy of 200 seconds behind the winner.  Last year he jumped ahead in Stage 5 only to give back a ton of time in the final two stages.  This year, Rickardsson still lost time, but only gradually.

With the women, you can first see that Kowalczyk actually traded the lead on a few occasions last year, but not this time.  The Italians, Follis and Longa both had very strong days on Stage 6, the 15km freestyle pursuit, but then yielded all that time and then some.  Marthe Kristoffersen really paid the price for a tough day on Stage 7, as did Astrid Jacobsen (and several others).  For instance, Petra Majdic simply fell apart relative to the leaders over the final two stages.