A commenter asked what would happen if we removed the bonus seconds awarded during the distance events of the Tour de Ski.  If we add the bonuses back in we get the following results:

While the actual top 12 have remained the same, the order has not.  The women see relatively few changes, but not so with the men!  The top five men end up completely re-arranged.  Of course, there’s always the caveat that the entire Tour may have played out differently without the bonuses.  Different time gaps along the way could potentially influence people’s strategies and decisions about whether to drop out and how to ski particular stages.  So in some sense, just adding the bonus seconds back in doesn’t literally tell us what would have happened. 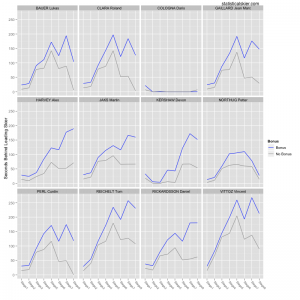 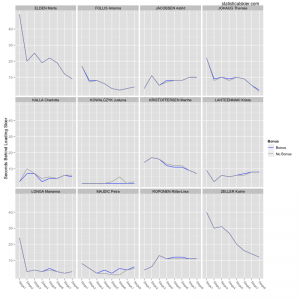 My apologies for not sorting the panels in a more sensible manner.  On the one hand, without the bonuses we end up with a rather thrilling spectacle of Bauer, Perl and Clara (and to a lesser extent Northug) chasing down Cologna over the final few stages.  But of course, without the bonuses, Cologna (and everyone else) would likely have skied differently, so we can’t really say that Curdin Perl “would have won” without the time bonuses.  Still, it’s an interesting thing to think about.

Despite there being fewer changes on the women’s side, you still end up with a pretty exciting “alternate ending”, with Majdic and Kowalczyk trading the lead mid-Tour and then Johaug rushing forward on the last day to claim the overall title.  Many of the other top twelve women won very few time bonuses (or none at all) so their lines are virtually unchanged.  But the same caveat applies here: if the top twelve women were really all within 20 seconds going into the final two stages, those races would have played out far differently than they actually did.

With the women, we see first that without the distance event time bonuses Justyna Kowalczyk would actually have surrendered the overall lead very briefly after Stage 5 to Petra Majdic.  That would have created some excitement, at least.  Here’s a closer look at how the Tour “might” have played out between some key players.  I’ve used seconds behind the median skier again simply because it creates more separation between the lines making them easier to distinguish: 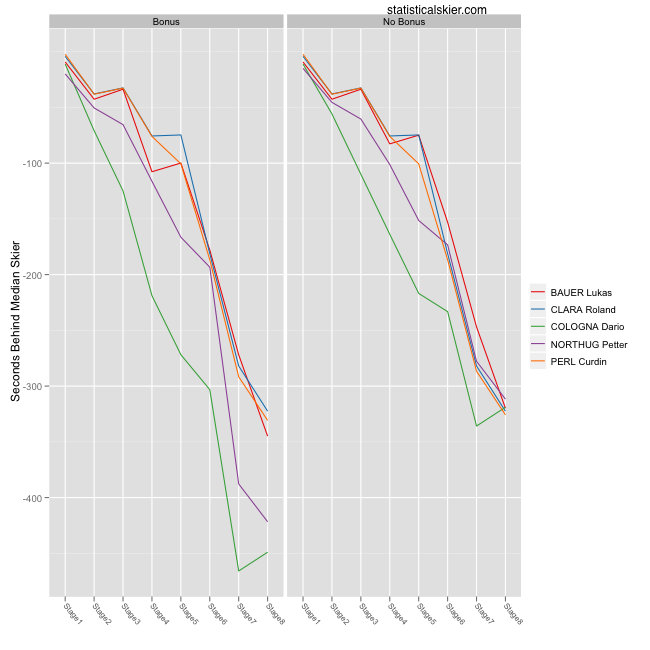 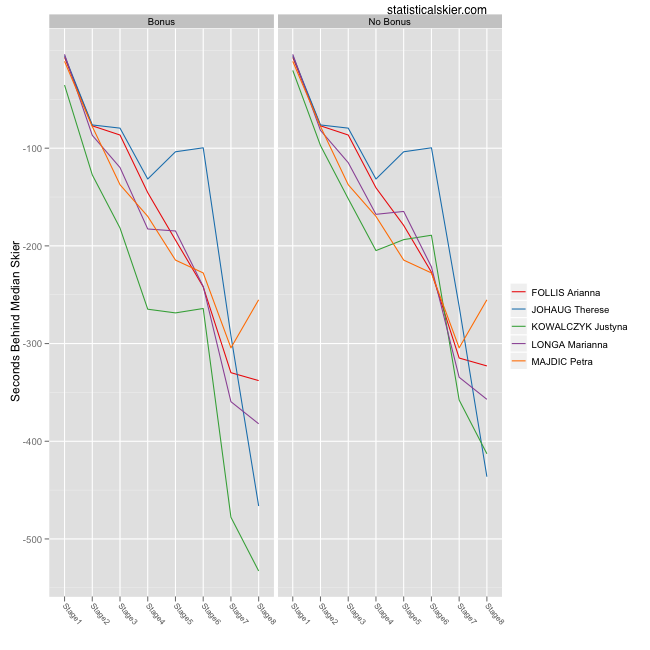 Most of the excitement on the men’s side would be due to the fact that Cologna had an enormous lead coming into the final stage.  If you just add those bonus seconds back in, it looks like he’ll be swallowed up by the chasers in the final climb, but in all likelihood he’d have simply skied harder that day.  But I suppose you never know…

The women would have seen a ton more lead changes a lot earlier, with Majdic, Follis and Longa all slipping past Kowalczyk for two stages before she came storming back in Stage 7.  (Hypothetically speaking, of course.)  And of course without the aid of the bonus seconds, Therese Johaug “would have” won the whole event on the final day.

All in all, that’s a pretty fun counter-factual.