Today’s U23 races in Estonia resulted in victories for some talented young skiers, Russia’s Evgeniy Belov and Finland’s Krista Lahteenmaki. In both cases their wins were fairly convincing, with Belov distancing himself from second place by 16 seconds and Lahteemaki crushed the women’s field by a full minute.

One of the difficulties in gauging performance in situations like these is that it’s hard to know how exceptional a race the winner had. Were these typical efforts for Belov and Lahteenmaki, or were they better (or worse) than usual? One way we can assess that is to look at plots of the differences in percent back between these athletes and the rest of the field, and see how today’s race compares to their past performances against these specific skiers: 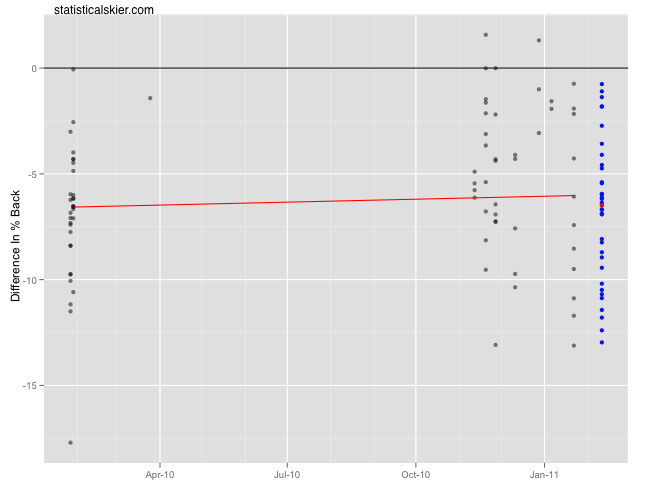 Difference in percent back between Belov and the field.

The blue represents today’s race and the rest of the dots represent times when Belov has raced against some of these people in the past. Notice the short time scale here, as Belov hasn’t faced many of these racers very often prior to this season. In general, today’s race represents what looks like a typical effort for Belov against this field, compared to his other races this season.

Difference in percent back between Krista Lahteenmaki and the field.

In contrast to Belov’s race, Lahteenmaki looks like she had a somewhat better race today than she has in the past, against these particular skiers. Prior this season, the difference in percent back between her and skiers in the U23 race were generally between 0 and -15. Today, none were higher than -3 and many were below -15. That suggests to me that this was a somewhat unusually good race for Lahteenmaki, which in turn might suggest that this kind of margin of victory might be difficult for her to replicate. But we won’t find out, I believe, since reports have her leaving U23s for other high level racing in Scandinavia.