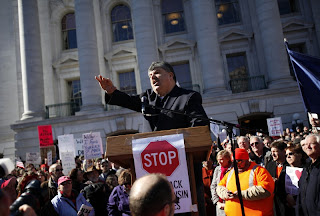 First of all, I’m totally in favor of democracy. I think we live in the greatest country on Earth and our freedoms are unrivaled. I value free speech and peaceable demonstration.

But why’d all that have to come into play this weekend at a race venue?
Earlier this week the Wisconsin governor proposed massive budget cuts and changes to union fees in the state, prompting a huge outcry and protests. As I was slowly coming awake yesterday morning while sitting at 5am in the Wenatchee airport, waiting to board a flight towards Chicago, I caught this news on CNN. Apparently the Madison Capitol Square was overrun with teachers, students, and union employees bent on changing the governor’s mind. I thought, “Huh, that will be an interesting crowd to race through…” This weekend’s SuperTour was set to be held IN the Capitol Square of Madison – every year the Madison Winter Festival hosts these races as part of the festivities. This year a classic sprint and 10km criterium were on the docket.
I didn’t think much more about the protests, figuring everything would be sorted out by the end of the day, folks would return home and we could get underway with the skiing. The dump trucks full of snow wouldn’t arrive until Friday night, anyways, to lay down the course on the streets. Plenty of time for this little misunderstanding to be washed up.
I arrived in Chicago and picked up my bitchin’ Dodge Avenger rental car and headed for Madison. At 7pm I pulled into CW and Mimi Acher’s driveway and my lodgings for the weekend; CW and Mimi are the parents of Zoe and Sasha Acher, two friends of mine from Dartmouth days. Their parents have been overwhelmingly generous throughout the years with ski racers coming into town for the Festival, and this year is no exception. In addition to myself, four members of the Craftsbury Green Team are also staying here. As we all sat down to dinner last night I mused out loud about the protests. The rest of the group had only heard snippets, and we joked about how it might throw a wrench in the works of the races.
Merely an hour later the wrench had firmly wedged itself in. A CXC Team twitter feed announced the races were cancelled due to the protests. After confirming with several key sources in the know, we had our answer: the streets could not be cleared to hold the event and with no back-up plans (or snow) for the races, we were left with nothing.
So again, while I sympathize wholeheartedly with the protesters and take offense on their behalf at the audacity of this proposed legislation, gosh darn it, why couldn’t they have waited till next week?
Owing to zero cheap flights home I’m stuck here till Monday. Running will be the order of business over the weekend, and upon returning home I’ll look towards heading up to Rossland, BC next weekend to race some regional races there as a consolation prize. Sometimes you get peanuts, sometimes you get peanut butter.