Holly BrooksFebruary 13, 2011
The last time I was in Norway was in 1998, I was 16 years old. After a family visit to the Holmenkollen ski jumps I remember being flabbergasted when I saw a slew of roller skiers riding the tram (public transport) from the ski area back down into the city of Oslo.  Compare the siting to growing up in Seattle where the only other people that roller ski are related to you and that’s a big deal! Eleven years later, here I am in Norway once again and the ski culture and appreciation is truly everything that everyone talks about. Folks – the hype is real. Before I continue, a couple photos of my travels so far: 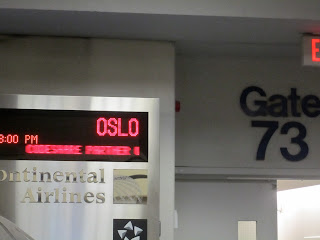 Oslo; the destination!  Our flights were incredibly smooth.  It took us three planes and approximately 24 hours to get here – the same time that it took us to get to distance nationals last year in Fort Kent, Maine or senior nationals this year in Rumford, Maine.  On two of my three flights I had an entire ROW of seats to myself which is unheard of these days. It made the 10 hour time change a bit more bearable.
I have been really excited for this entire trip for a while but most recently, I’ve been pretty psyched about our pre world champs training camp in Sjujsoen, Norway.  I was told that we were staying at a lodge that Bjorn Daehlie (God of Nordic Skiing) is a part owner of. So…. when we arrived to find our accommodations we were a bit surprised by the initial appearance of the place: 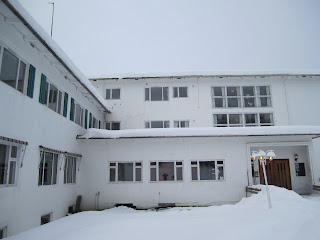 Luxury? No….. Actually, our first impression was, “What is this?” A mental institution?  A prison?  A dilapidated building from the Soviet era?  Are we in Norway? Although we had our initial doubts, this place has turned out to be awesome. Yes, the exterior of the building leaves something to be desired and the rooms are minimal but the food is excellent and the hotel staff is first class.  This building apparently went bankrupt a couple years ago and Bjorn + crew decided to invest in it.  As far as I can tell, Sjujsoen is like the Norwegian version of Canadian Silver Star – or a Nordic Ski mecca that attracts those from out of town as well as people from throughout the country itself. There are over 200 kilometers skiing right out our front door that is continuously groomed and the famous Birkie trail cuts right through the middle of the area. 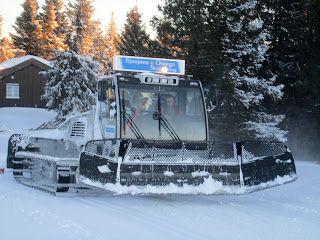 It seems as if they continuously groom the trails – there are always fresh tracks to be had…. (free!) provided by no other than the Norwegian Government! 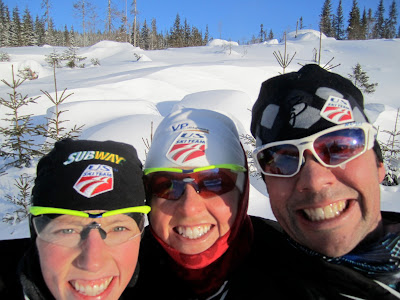 Kikkan, Holly & Erik on our ski the first day here…. One can ski from Sjujsoen to Lillehammer, the site of the 1994 Winter Olympics! 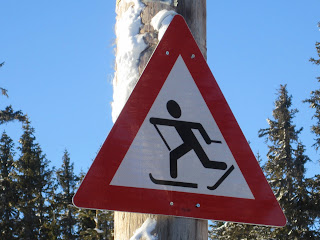 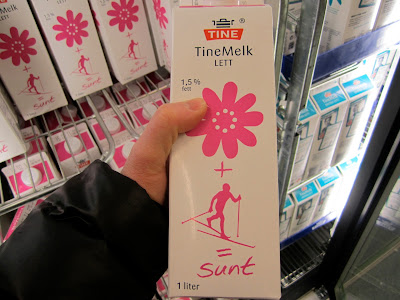 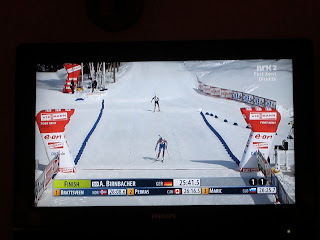 And….everywhere.  This is a picture of the biathlon races live from Fort Kent of all places, streamed into our hotel room.  Additionally, it seems like every third commercial is either about cross country skiing or stars xc skiing athletes in the commercials.  Earlier today we went to go lift in Lillehammer and more races from Fort Kent were shown in the weight room. After the race, they had a sports center set-up, similar to what you would see after an NFL game – but the discussion was about the ski race, not the game.
The clouds have finally rolled into Sjujsoen and tomorrow we may have grey skies but I am sure that the skiing will still be first rate.  Until my next post, I will leave you with a couple more photos from the last couple of days. (And yes, sorry for the delay in posting – the first three days of being here, none of the North Americans could connect to the Internet – only Euros could get online!  Luckily, the problem is now fixed!) 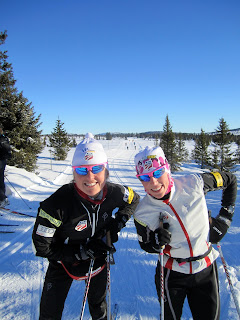 Me and Kikkan on the Birkie trail 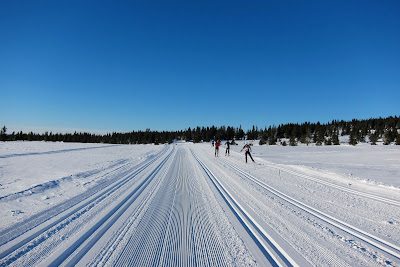 Pure perfection – the Birkie trail again. It’s crazy how many people were out skiing this this past weekend.  The Birkie is only a couple weeks away and it was literally swarming with families and skiers of all ages.  It was cool to see many people skiing with backpacks – surely taking lunch with them and skiing for a couple of hours! Ski culture at it’s best – not to mention, a very healthy nation! (photo from Kikkan) 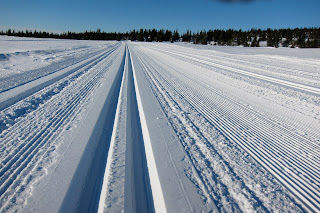 Can’t get enough of this! (photo from Kikkan) 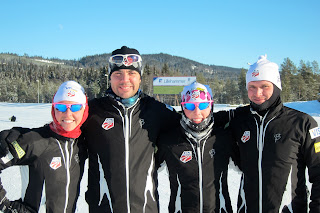