The Empire State Winter Games are able to continue this year because Adirondack communities formed a coalition, drummed up local support, have gathered the needed volunteers and have gotten the region excited about contributing to an important event that means something to New York athletes. Lake Placid will host 13 winter sporting events next weekend for middle school to college age student-athletes. It is unique because these competitions are either the height of a New York athlete’s sporting career or they are an important event along the development pipeline for aspiring elite athletes. A couple athletes in particular who were past ESG Champions decided to contribute to the fundraising efforts of the Games by hosting an online auction of ski apparel from local Olympians. Billy Demong, the nordic combined skier, and Kris Cheney-Seymour, my first biathlon coach and Saranac Lake architect, of Demong Designs partnered with John Farra, former Olympian and the US Ski Team, the Olympic Regional Development Authority (ORDA) and the Lake Placid CVB this winter to gather items from Andrew Weibrecht, Tim Burke, Lowell Bailey, John Napier (bobsled) and myself.

See the skis in the background of the photo? Those are one of Billy’s training skis from a year ago at the Olympics and so far there’s one bid on them for $300. To find out what else is up for auction check out the AUCTION. In this auction created by athletes for athletes 100% of the proceeds go directly to the Empire State Winter Games.

“Our community, the Adirondacks and this region that has taken the mantle of the Empire State Games and has kept it going, really speaks to how our region understands and believes in the power of winter sports, the aspirations of children and the hopes to inspire athletes.” -Kris Cheney-Seymour, “Olympians doing their part” 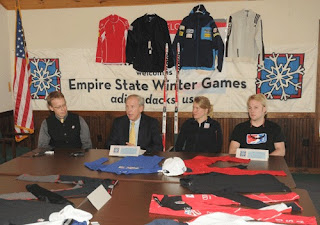