After reviewing yesterday’s sprint race in Drammen, Norway it’s time to get caught up on the distance racing action from the day before. And lucky for you I’m going to use some new graphs that I’ve been working on for a while. They’re similar to the biathlon graphs I introduced last week, with a few modifications and improvements. 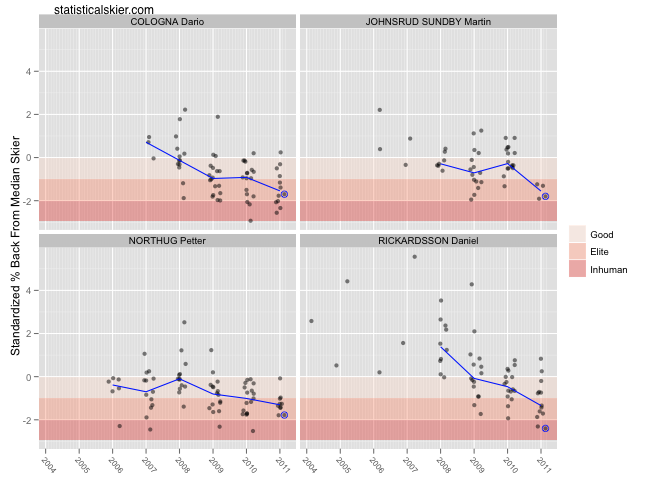 This should be fairly self-explanatory, I hope. But here are some technical details if you’re into that kind of thing:

Anyway, back to Saturday’s race. Daniel Rickardsson outclassed the field by a healthy margin, putting himself well into the ‘Elite’ performance range. As you can see, this represents one of the best races of the season for him or even for his whole career, and if you’re from Sweden you’ve got to like the way his performances are trending.

Martin Johnsrud Sundby also had a strong race, which stands out in part because of the heat that the Norwegian men have taken lately. Despite the complaints, it seems to me that Johnsrud Sundby has actually had a very strong season in distance events this year. Dario Cologna has been probably the strongest overall distance skier this season, but Saturday’s race, while just edging into the ‘Elite’ zone was probably just average for him. He’ll be expecting better over the next week at World Champs. Northug also had a strong race for him this season, despite being outclassed by Rickardsson. 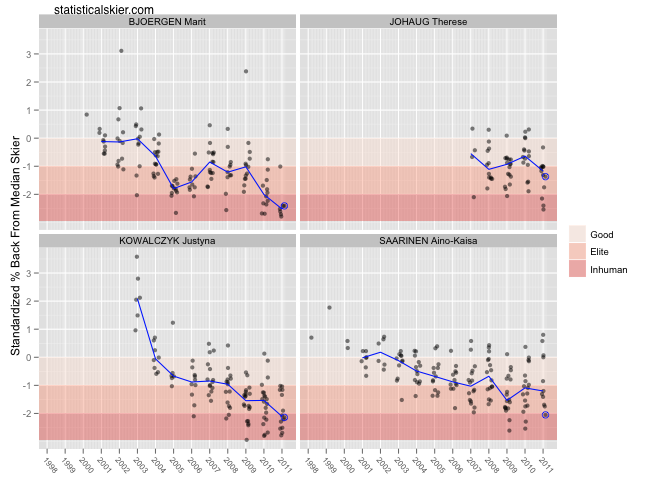 Now you can probably understand my word choice in labeling these performance zones. Marit Björgen is, indeed, inhuman. I mean, the only distance race she’s had this season that wasn’t more than 2 standard deviations away from the mean was the pursuit from the mini-tour back in Finland, where the tactics of stage racing came into play. And Saturday’s performance wasn’t even really as good as several of her others this season.

Despite the focus on Björgen, Kowalczyk and Saarinen were actually not that far behind; the noticeable gap was really between third and fourth. Saarinen in particular had a strong day, seemingly recovering from problems with injuries. Hopefully her fitness will hold through World Champs. Johaug, despite finishing fourth with a performance that is pretty close to her median for this season, has had tantalizingly better results at times. When she’s hot (well, she’s always hot on some level) she really can put in dominating performances.