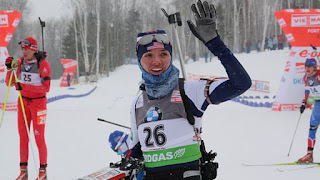 Maine seems to agree with me. After a stellar weekend in Presque Isle, the World Cup moved up the road to Fort Kent for three more races: a sprint, pursuit and mass start. With only 57 women here, I was guaranteed at least 2 starts, but would have to earn my place in the mass start since only the top-25 overall World Cup ranked women, plus the next top-5 from the weekend of racing qualify. Not being in the top-25 overall, and having never made a mass start before in my career, I knew it would be tough, but certainly attainable.

After a clean sprint on a VERY cold day earned me a 17th place, I was in a good position. It felt great to have another clean race here in Maine, and though I didn’t feel the courses here agreed with me as much as in Presque Isle, I was very pleased with the outcome. Warmer temperatures greeted us for the pursuit race, but my ski speed just wasn’t there. Despite only 3 penalties on the range, I dropped down to finish 27th. Not that I’m complaining about another top-30 finish, but I thought my chances for the mass start were gone. Luck was on my side, though, and with a few women pulling out of the mass start, I grabbed the last spot: bib number 30. My first World Cup mass start ever, and on US soil! I was excited-this would be an experience to remember.

After two weeks of racing, and three days in a row on the tough Fort Kent courses, we were all pretty tired. You could tell right away that the big hill on the course (nicknamed the Mt. Everest of biathlon by some of the Germans) was not going to be a place to get away, but simply to get through. My strategy was to try and shoot well, and just enjoy the experience. Being my first Mass Start, I wanted only to have a solid race and gain the experience of starting with the 30 best women on the World Cup. I only had one hiccup in my plan, missing 2 targets in my second shooting stage, but otherwise I was clean, and skied fairly well. I finished 23rd, with time to give a wave of thanks to the crowd as I finished. All in all, it was a great weekend and an amazing experience to race World Cups in the US. Hopefully it won’t be so long before we’re back!

I’m now back in Lake Placid for a week before leaving for World Championships in Russia. The work is pretty much done now, just some fine-tuning left. The final stretch is here!

In Northern Maine, Pippen Takes a Shot at Biathlon