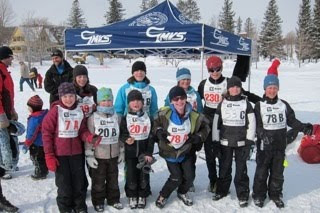 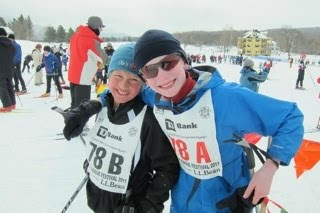 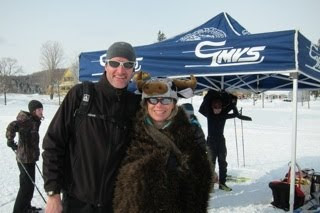 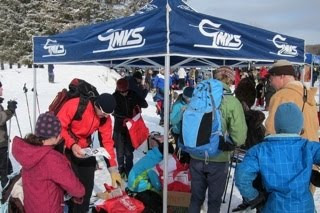 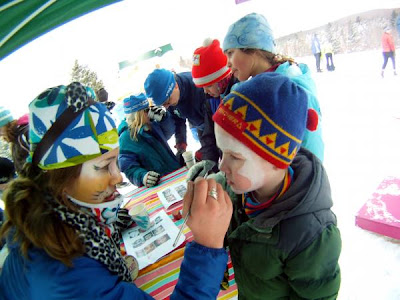 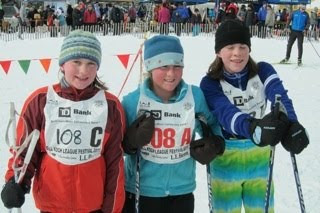 The 2011 Bill Koch Festival took place this past weekend, practically in our own back yard. Many of the kids I talked to said it was the best event in recent memory. There was food, races, a mini-marathon featuring hot-cocoa and brownies at the Robert Frost Cabin, maple cotton candy, forest-creatures, and face-painting (not to mention great weather and great conditions).

Thirteen of our Mad River BKL athletes took part in the weekend. Some were there for the mini-marathon, some for the relays, and some for both days of racing. The BKL Festival is a unique opportunity to have exposure to the joys of skiing and racing, with the atmosphere of a Carnival to keep the pressure low. All of the Mad River BKL parents and athletes bought into the idea of having lots of fun. Coach Kate was well-prepared, as usual, with her never-ending pocketful of Swedish Fish!

We started Saturday with some of the BKL’ers (along with Coach Kate) joining me in a GMVS van for the ride to Breadloaf. Oddly enough, the BKL’ers like the same music as most of the athletes on the GMVS team. Hmmmm. Throughout the morning, athletes took part in 2-person relay races. Competitions are divided by gender and grade, so kids race against the similar ages and abilities. After our lunch break, most of our skiers got to meet and receive autographs from Bill Koch himself! Bill was decked out in a coonskin cap (keeping with the forest creature theme), and he was also cheering on his son who is a skier in the West River BKL program in Southern Vermont.

In the afternoon there was a non-competitive “Mini-Marathon”. This loop took skiers approximately 5km through the woods. Along the way, there were facts about certain plants and animals, as well as poetry by Robert Frost:

Stopping By Woods on a Snowy Evening

Whose woods these are I think I know.
His house is in the village though;
He will not see me stopping here
To watch his woods fill up with snow.

My little horse must think it queer
To stop without a farmhouse near
Between the woods and frozen lake
The darkest evening of the year.

He gives his harness bells a shake
To ask if there is some mistake.
The only other sound’s the sweep
Of easy wind and downy flake.

The poem started with just the first line written on a tree. After every few hundred meters, there was another line of poetry added, keeping the kids motivated to ski all the way to the Frost Cabin. Upon reaching the cabin there was hot-cocoa and brownies. A few lucky skiers even got some powder tele-turns on the descent. And I’m pretty sure every one of the 500+ athletes got their hands on some of the delicious Maple Cotton Candy that was being handed out in the stadium area.

On Sunday the kids raced individual classical races. Some clubs have race suits for all of their members, while others opted for “jeggings” which look just like blue-jeans. I think our Mad River BKL’ers were somewhere in the middle: functional clothing, but not too much lycra! I’m happy to say my choice of kick wax worked, and the kids skied well.

This year, we had 13 Mad River BKL athletes take part in the Bill Koch Festival. Next year, let’s shoot for 20 or more:

Several of the GMVS athletes made the short trip over to Breadloaf to help with face-painting and bib-collecting. Justin helped with timing on Saturday, and Tim was there both days with the Mad River BKL crew. It was an awesome weekend, and many thanks are due to the crew at NENSA, Frost Mountain Nordic, Breadloaf, and the Middlebury College volunteers that put in a TON of effort.

Here is a link to the NENSA write-up: New England BKL Festival article.

And more photos can be viewed at: Bill Koch Festival Photos.