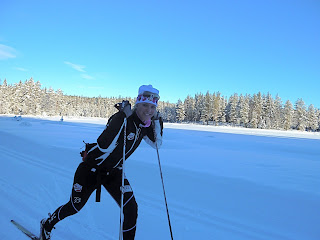 So far my norwegian experience has been quite the adventure. Having never been to Norway before, I have failed to really use my brain, but instead run around in awe with my my eyes wide open. Nearly 60 hours into my trip now… I am just starting to loose the buzz. This country is amazing. I feel like I can’t stop looking around, and being in love, and simply not getting enough of every moment. There are nordic skiers everywhere! EVERYWHERE! Not only is everyone really nice, but they are all pretty, and they speak so nice. I have always enjoyed the sound of the norwegian language- there is nothing that reminds me of speedy skiing more!

So my first day with my brain turned off turned into quite the adventure. In my two activities of the day, one skiing, and two exploring downtown- I managed to get myself extremely lost- both with Jessie Diggins (who I believe is in the same state as me at this point). The skiing consisted of me strapping on some classic skis and taking off on the “Norwegian Highway”, which can simply be described as a classic trail, tracked three tracks wide, with approximately 500 skiers on it.! Thinking nothing off it, I set out on my skis, chatting away with Jessie, and loving every moment of the perfect tracks, great terrain, and beautiful skiing. About an hour into it I decided it was time to turn around…. but what I didn’t really realize is that during the past hour I had taken maybe 20 turns, all of which I didn’t pay attention to… and not only that- I had no idea what the place was called where I started. All norwegian words have lots of j’s, k’s, and i’s in them so its hard to even tell them apart. After asking nearly 10 people, all of which sent me different directions, I decided to just head in one direction and hope to god it would eventually take me there.! To my surprise 30 minutes later I started recognizing some of the trails!! I had made it home. 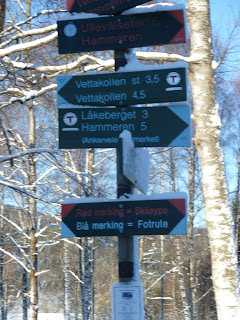 One of the many signs that make no sense!

Thinking I had figured it all out- I laughed it off and forgot to really ask what the place was called where we were staying…. which was my first mistake when Jessie and I headed out that afternoon for Oslo on the train system. The older girls told us “go on train 3, stay until the last stop, and you will make it home”. Trying to keep things exciting, Jessie and I tried to escape buying tickets, and just be sly. After being tourists, snapping lots of shots, hitting up all the souvenir shops, searching for the norwegian bjorn borg underwear, and buying some good chocolate- we set out for home. Following the signs to “3” we jumped on a train that did not look anything like what we started on. Realizing this just as the train started moving, we were stuck… and the ticket man was walking towards us. Somehow we escaped the madness and jumped off as quickly as we could at the next stop. Turns out that train was headed towards Trondheim… which is a long ways away from Oslo, and our hotel! Running around for about 30 minutes asking everyone where to go, when we didn’t even know what the name of the place was called quickly became pointless. Finally, when Jessie and I became super panicked, I spotted a woman wearing ski boots. Trying to describe to her what hotel we were at… we finally figured out we were on the underground train station, and we should be on the above ground… who woulda known there was two separate things!! 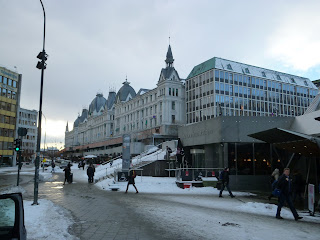 sooooo Jessie and I slapped hands and headed in the right direction. Let me assure you, the first thing I did when I got back was ask the name of where we were and say it in my head 20 times to assure that I knew it!! Sandsvan!

Unfortunately we left the next day though….!!

We are now in Beitestolin for the Norwegian National Cup races which start tomorrow. Skate sprint, 10k classic, and 15k skate. Competition will be stiff, as always when norwegians are involved. Word is, there are close to 800 starters… should be good fun! We are staying in this sweet hotel with all the Norwegians, so I get to sit and eat dinner across from Astrid Jacobsen! Good fun 🙂