The day after the race may seem early to start doing serious evaluations, but I thought it would be interesting to take a look at different nations’ performances in championship sprint races over time, to put yesterday’s race in some context.

I’ve taken the sprint results from Olympic and World Championship races since 2001 (which, admittedly, includes some changes in the sprint format) and plotted the results over time for each nation. For instance, here’s the version showing the US and Canada: 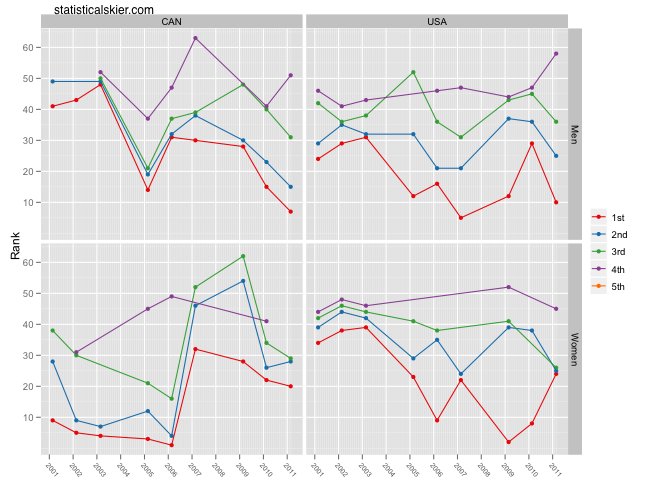 The y-axis is an athlete’s result in the race. The colors group together each category’s best, second best, etc. result over time. The lines will sometimes cross as a result of there being different numbers of athletes competing from year to year.

As you can see, despite Alex Harvey’s mishap yesterday the Canadian men still had a pretty strong day overall. The US men have been up and down a fair bit over the years, including a pretty bad one last year in Vancouver. But yesterday probably was about average, given recent year’s performances. The US women of course didn’t expect to see their red line (their best result) shooting up like that. However, they may take some solace in that they had a somewhat stronger performance by the rest of the team, as their 2nd, 3rd and 4th best results saw modest to significant improvements over the previous few seasons. (It’s important to note here that I’m intentionally comparing performances only to OWG and WSC events, since the number of skiers nations can enter is different which can make the fields somewhat weaker. So the fact that the US women’s 2-4th best sprinters saw improvements is a “real” improvement compared to past WSC/OWG races, not just a result of a weakened field.) The Canadian women saw a huge drop-off with Beckie Scott’s retirement in 2006, but they have been improving, although yesterday’s race was probably only a modest improvement over the Olympics last year.

And here’s the same graph for the “big six” nations (NOR, SWE, FIN, RUS, GER, ITA). It’s big, so click through for the full version:

Only a few notes here: