I don’t mean any disrespect by the title, there, it’s just that the Rybinsk World Cups haven’t been very well attended. I was told by a friend recently that the Canadians included as part of their WSC selection criteria the standard of “finishing in the top 20 and the top half of a World Cup event”. The number of WC individual events where you could potentially be in the top twenty but also in the bottom half of the results is a fairly short list.

Rybinsk, obviously. The China World Cups from several years ago are another option, as are some of the later Tour de Ski stages. Some of the WCs held in the US or Canada might have had some very small fields as well on occasion.

I’ve heard that travelling there is inconvenient for various reasons, and I think they might also just be located in a tough part of the winter schedule, falling very near many nation’s national championships. Who knows. What I can do is to show you just how poorly attended the Rybinsk events have been: 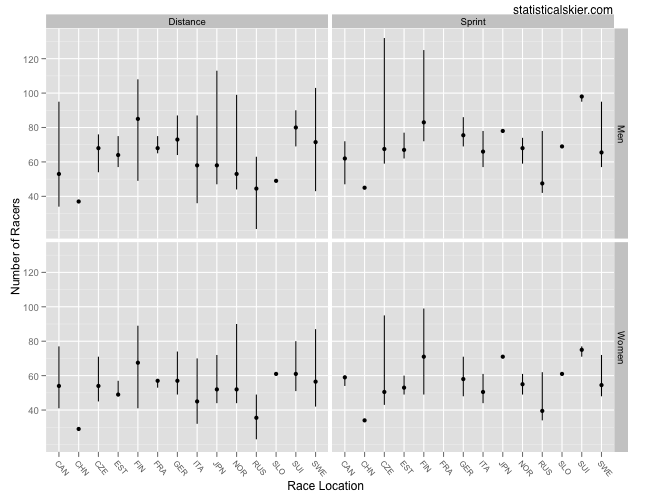 The Russian WCs do stand out (along with the smaller number of China WCs) as often having very small fields. They have, on occasion dropped down below 30 in distance events. The median field size for the men’s distance race in Russia doesn’t seem dramatically lower than several others, but it still is lower.

Another way we can look at this is by counting the number of nations that are represented in a given event: 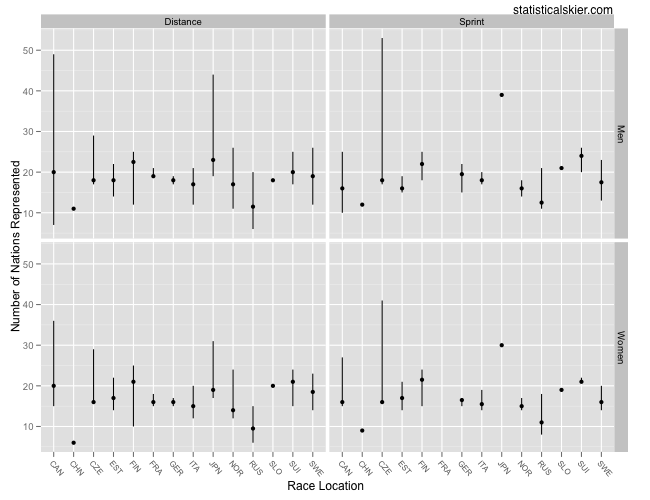 Once again, this shows the min, median and max number of nations represented in a single WC event in the given location over the past four seasons. The huge range for the Canadian distance races is largely a result of the Olympics and some poorly attended pre-Olympic WCs. The similarly huge range for the Czech Republic is the result of one or two races at World Championships back in 2009. But once again, the Russian WCs stand out as one of the more poorly attended events. Since the China WCs aren’t a regular thing on the schedule, they are certainly the worst attended regular event.

I’m not saying they should change the schedule, or move the races elsewhere or whatever. Honestly, I don’t really care. I suppose it might say something about how unwieldy and fragmented the FIS World Cup schedule has become, though, that they can hold a World Cup race and so few racers will consider it worth their time.