With Torin’s shoulder still needing a few more days before subjecting it to racing, he opted out of starting this past weekend’s World Cup in Drammen, Norway where the rest of the US crew was racing. It was a pretty easy decision but not too pleasant as we were both looking forward to another chance work on some of the new ideas and keep the momentum rolling after last weeks race in Beitostolen.

Instead, we made the 30 minute trek into Olso and Holmenkollen for a chance to train on the sprint course for the first time. Hollmenkollen is a legendary ski race venue and has hosted the 1952 Olympics, the 1982 World Championships and now these upcoming Nordic World Champs. To be here in the lead up to the competitions is to see a country gripped by the sport of Nordic skiing. The newspapers are featuring daily front page stories on the event and the sporting heroes who will be competing. The TV is running daily shows of old black and white newsreels of notable competitions and competitors from the days of yore. It is clear that while they love celebrating the present event they are very mindful of keeping the history alive and showing appreciation and respect for all that have gone before these modern champions. This helps give perspective; allowing us to see that the current generation of erstwhile champions (to paraphrase Issac Newton) “Stands on the shoulders of giants” as they reach new heights. 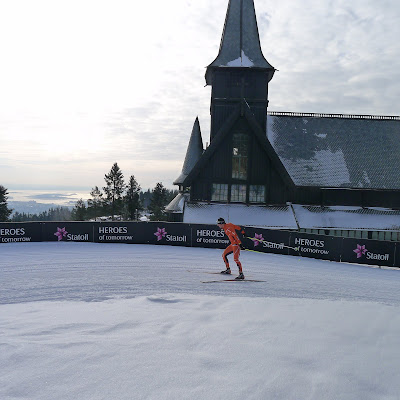 Torin passing an ancient church adjacent to the course.

I would rank this sprint course as one of the best designed I have seen. Starting in the HUGE stadium (I heard Liz Stephan speculate that it had to take a least one hundred passes of the Pisten Bully groomer to pack it out)the first 200-300 meters are a gradual uphill to a hard left hander. Dropping into a tuck for a fast downhill into right turn leads to the base of, what by sprint course standards is a big climb. This climb will require the men to V1 for 30 seconds. The ladies course enters the climb about 1/3 of the way up but after the steepest section. The climb takes them over Gratiskollen (meaning “free hill”, where traditionally spectators could watch the races without paying). I have paid $100 for the privilege of standing with a few thousand
drunk Norwegians in knee deep snow to watch the sprint. It was the only place that still had space available! These crafty Norwegians know a thing or two about capitalism. Anyway back to the races. After the top of Gratiskollen the course begins to drop into the stadium with a long gradual downhill that will require fast, no poles (speed skater style) skiing for 300 meters before a short steep climb and a big curve around the back end of the stadium. The final 200 meters is down hill and flat promising some very dramatic finishes. There is plenty of room to pass. The big climb will help spread out the field a bit. The flats and gradual downs will reward the skiers who are at home at high speed skating. It has the whole package of modern skiing skills. 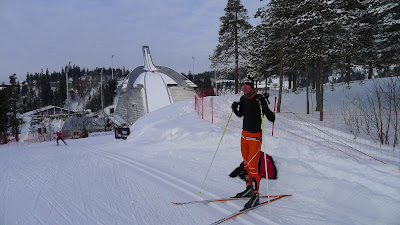 Torin atop Gratiskollen looking into the stadium and the monster 130m! jump hill

Torin did some hard intervals while I danced around trying to keep warm and film the efforts for immediate analysis. The Norwegian World Champion sprint team was also skipping Drammen (except Northug) and were, interestingly, doing a very similar workout to ours.

The circus atmosphere is beginning to build early with many tourists already wandering around the stadium. Here is me trying to coax a reluctant Torin away from the ski simulator that promises all thrills of jumping the big hill at Hollmenkollen or racing the downhill course at Beaver Creek. The crowd of tourists waiting to get a ride attests that Norwegians have strong stomachs. 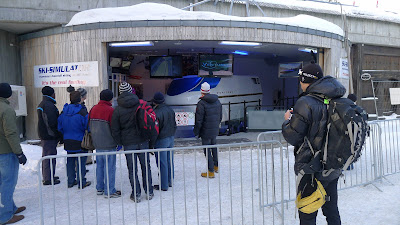 Because when you turn around from the simulator cue this is view down the out run of the jump! 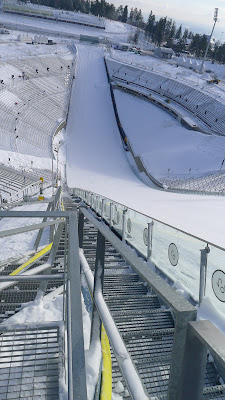