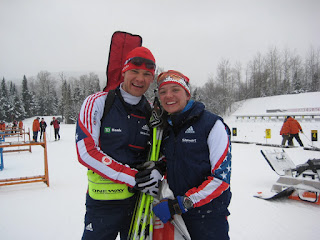 Zach and I after he had a great race in Lake Placid on Sunday. (photo: Mary Boschen)

At long last, I arrived back in the US last Monday to spend a week training and re-grouping before heading to Northern Maine for World Cups 7 and 8. Lake Placid has been having a great winter, so the training was fantastic. There was even a NorAm Cup Saturday and Sunday for which I played the role of “official” cheerleader. It was great to see so many competitors out and some great racing by Canadians and Americans alike.

On Monday, the group of World Cup athletes based in Lake Placid (Tim Burke, Lowell Bailey, Haley Johnson, Laura Spector and me) took a charter flight to Portland, Maine for a press conference at Anthem, a major sponsor and supporter of the Maine World Cup races. We then flew up to Presque Isle and got settled in our hotel for the week. It was a great event, and certainly much more relaxing and fun than a 9 hour drive! A major plus was the clear weather, making for two gorgeous flights over the northeast. 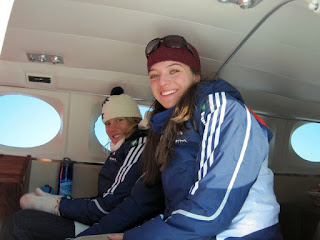 Haley and I getting ready to head to Portland! (Thanks to Laura Spector for the plane pictures!) 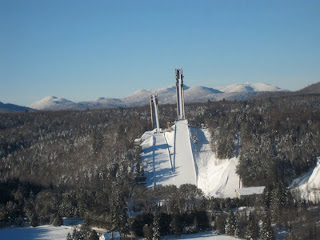 The LP jumps just after take-off. 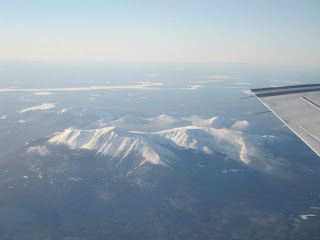 Mt. Katahdin from the air, as we flew to Presque Isle.

The frigid weather predicted for this week seems to be mellowing a bit. It’s still going to be cold, but at least legal racing temps…a good practice for World Champs in Siberia! Whatever the weather, it’s going to be a fun couple of weeks up here at our “home” World Cups. The lack of travel makes it relaxing, and also will many plenty of fans yelling for Team USA. I’m looking forward to it! 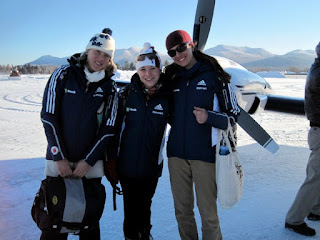