Ok, now we can talk about how the North Americans fared this weekend. Once again with the very large graphs, starting with the women: 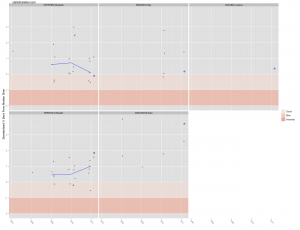 Not a ton of racing experience at this level in this group, obviously. It’s tempting to focus on the fact that Stephen, Brooks and Diggins were all in the top thirty, and to be sure that’s better than a lot of alternatives. But we should keep in mind that the field at WSCs is actually a bit weaker than a typical WC field, since Norway, Russia, Sweden, etc. are all limited to only 4 skiers per race. These nations have deep benches and a typical WC race will feature at least an additional 8-10 strong Europeans, more depending on where the race is and the composition of the Nation’s Group skiers.

So strictly looking at the standardized percent back from the median, I’m inclined to call this a decent, but not outstanding race for Stephen. In the cases of Brooks and Diggins, we have almost nothing to compare these races to. In Diggins’ case, literally nothing. But in my experience, races in the positive zone (above zero) are fairly unlikely to place a woman in the top thirty in a regular WC race. (Not impossible, but not likely.)

On the other hand, we could note that the bulk of the results by Stephen and Arritola (both US Ski Team members) have fallen between 0-1. So it’s notable to see both Brooks and Diggins show up and lay down performances right in that zone as well.

And man, what a bummer of a season is Morgan Arritola having? I really feel bad for her; with one exception, she hasn’t really had a whole lot to be excited about so far this season. I don’t know what to say except that I really hope she turns things around, and soon.

A lot more data to look at with the men: 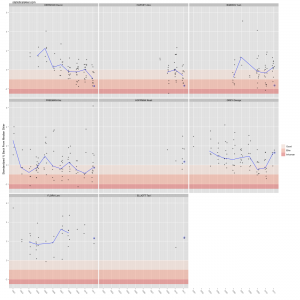 Obviously there was a certain amount of disappointment for the Canadian men, but Kershaw, Harvey and Babikov all put in some of the strongest efforts of their respective seasons. On a day when the top twenty are all within 30 seconds, the difference between a medal and 15th can be very, very small, even if you’re racing well.

George Grey didn’t fare so well, sadly. This might totally be crazy talk on my part, but I almost wonder if they’d be better off going with Len Valjas for the relay.

The American men had another so-so day. Freeman had another race that was just ok; sadly there have been a few too many of those this season. I’d still keep my eyes out for him on Tuesday, though. He really does like those 15km classic races.