As measured by standardized percent back from the median skier, anyway. I mentioned in my recap from the other day that Matti Heikkinen’s race was one of the best ever, in terms of how far he out-paced the field. I actually got the count slightly wrong, since I was counting visually on my computer screen, so it was actually the 26th best I have on record, not the 18th. My bad.

That’s still very, very extreme. The top thirty for both men and women (displayed below) represent the top 0.07% of all WC, WSC, OWG and TDS performances I have on record since 1991-1992, so this is really the extreme end of extreme. Here’s the table:

All Time Best Standardized % Back From Median Values

The top thirty performances at measured by standardized percent back from the median.

Now, you’re already probably noticing some distinct patterns here. First, there’s the overwhelming presence of Olympic and World Championship 10/15km races. It’s tempting to assume that these events produce more extreme performances when measuring relative to the median skier because these events have slightly weaker fields than many World Cups and will include a lot of skiers at the back end of the field that normally don’t race on the World Cup. And that does probably explain some of it. But having checked a few measures of the strength of the median skier from race to race, there isn’t as a big a difference between WC and OWG/WSC races as you might think, at least on average. Also, the fact that two races account for 9 of the top 30 tells me that unusual race conditions is probably a bigger driver of these extreme results than weak fields.

I mentioned in my previous post that there are several known dopers on this list, and I was mostly referring to Johann Mühlegg and Mika Myllylae. Markus Gandler is another name that raises some suspicion; I think he’s never technically been caught and convicted of actually doping, but there was that stuff from Torino that I remember. Andrus Veerpalu appears twice in the top 30, and he’s a guy that people sometimes whisper about, but he hasn’t (to my knowledge) come under any concrete suspicion. And in any case, I have this vague recollection that the 15km classic in Torino was one of those weird weather days, but I’m not sure. And then there’s Vassili Rotchev, who got in trouble for a filing failure recently and is being coached, I think, by his wife who is currently serving a suspension for EPO, but accusing a guy based on that evidence is pretty lame.

Also notable is that Ivanov and Veerpalu both appear on this list from the 2002 Olympic 50k. Mühlegg “won” that race, of course, but was stripped of his gold, and  Mühlegg, Ivanov and Veerpalu all simply crushed the field that day; there was a nearly 2 minute gap from Veerpalu to Odd-Bjørn Hjelmeset in fourth.

The other category I mentioned was the folks who are genuinely insanely fast skiers: Dæhlie, Ulvang, Smirnov, Elofsson, and Skari clearly belong in this category and they constitute 10 of the top 30 positions here. Most of the other skiers are also very good, but perhaps not quite at the “super-star” level: Bauer, Piller Cottrer, Södergren, Belmondo, Albarello, Majbäck, Jonsson, Fredriksson, Valbusa and Heikkinen. I’m not as familiar with Ivanov and Rotchev’s skiing careers.

As for unusual weather or waxing: the 2007 WSC race that led to Berger and Karneyenka taking 1st and 2nd was a notoriously strange weather day and that was the one that I immediately remembered when I first looked at these values. I have this memory that the Torino 15km was also a strange weather day, but I could be wrong about that one. And it only took a little Googling to figure out that the 1992 Olympic men’s 10k was also conducting in a driving snow storm. So if I’m right about 2006, that makes 12 of the top 30 arising from bizarre weather.

Another interesting way to look at this is to examine each of these races in the context of each athlete’s entire careers (this graph is very, very big): 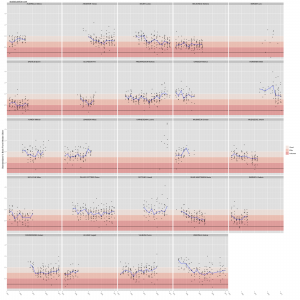 The black bar is the cutoff for the top 30 races (-3). You’ll note that there’s a mix here. Some of these efforts are obviously wildly out of proportion from the athlete’s other results (e.g. Ivanov, Rotchev maybe Gandler), some only seem moderately out of the ordinary (e.g. Fredriksson).