Holly BrooksMarch 30, 2011
It’s the eve of the “off day” in Sun Valley and I am half way through my second straight mini-tour.  What is a mini-tour? It’s basically a series of races packed into a small amount of time.  The results from each day are cumulative and time bonuses are awarded for performances in different formats. 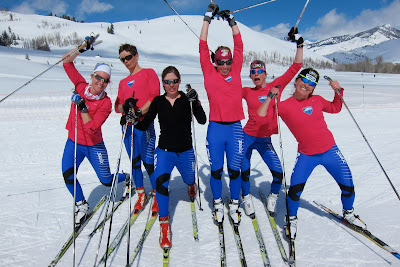 A fun, fast girl’s team in Sun Valley!
This is the end of my two-month stint away from home and at the end of this mini tour, I will be headed back to Alaska. My European tour ended with a mini-tour in Sweden which also doubled as World Cup Finals.  The Sweden Mini-Tour featured a classic sprint around the King’s Palace in downtown Stockholm followed by three consecutive hard days of racing in a smaller town up North called Falun. 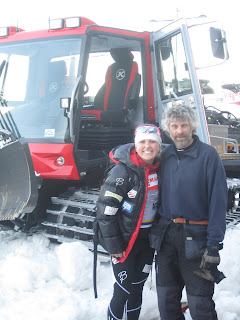 With Thomas Wassberg, the official “groomer” for the city palace sprint…. Wassberg is also a multiple time Swedish Olympic and World Champion.  Nice to have someone that knows what’s up setting the tracks! 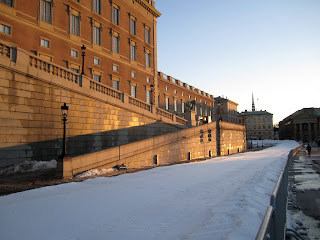 Trucked in snow around the King’s Palace 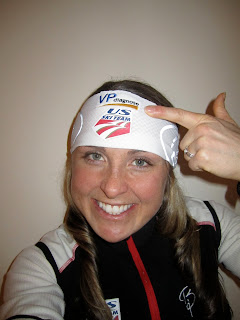 A special thanks to my Swedish cousin Lars Arvidsson and his company, VP Diagnose for being my European “headgear” during my five week racing stint in Scandinavia.
I earned my right to race in Falun by being the “Continental Cup Leader” based on my early season Super Tour performance. I felt lucky to be there as many World Cup regulars ended their seasons with the Lahti (Finland) World Cups as they didn’t qualify for Falun. 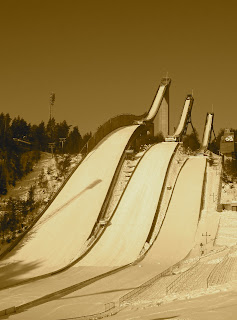 Signature Lahti, Finland ski jumps…. funny fact – Rob raced in Lahti in 2001 for World Champs!
Basically, this meant that I had to race with the “elite of the elite.”  While I wasn’t ecstatic about my results, I had to remind myself that it was an accomplishment to beat ANYONE there, let alone have a good day. 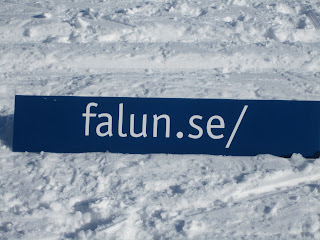 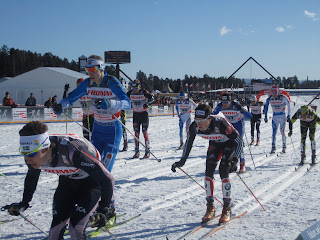 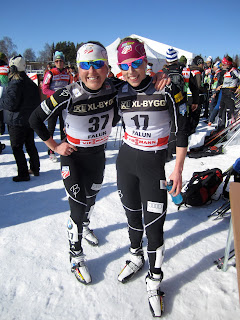 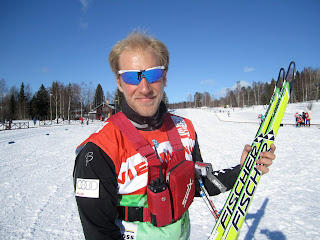 It was sweet to have APU wax tech, Casey Fagerquist join us for World Cup Finals! 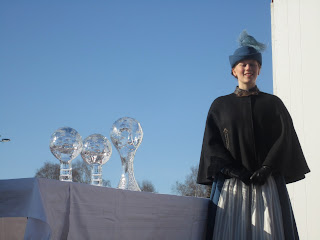 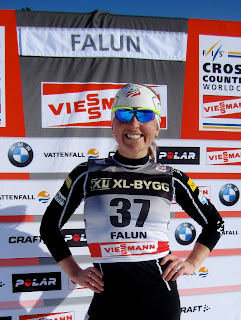 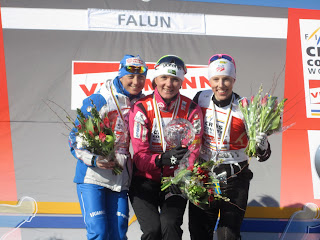 Congrats to Kikkan on her third place, podium finish in the overall World Cup sprint.  Crazy enough, the women in first and second are both retiring after this season so Kikkan is probabaly a favorite for the highest spot on the sprint podium next year! 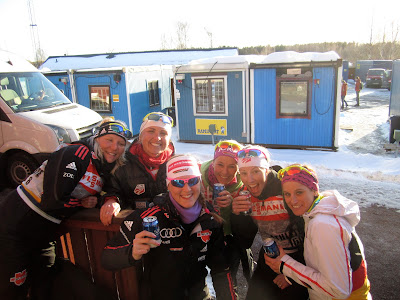 After the last race the German women’s team invited us to their wax trailer for brats – brought all the way from Germany!  (Swedish sausages apparently aren’t acceptable!) 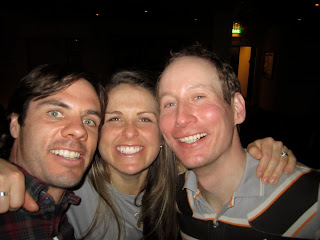 At the end of the World Cup season there is always a really fun dance party.  Not only can these athletes ski fast but they can get down on the dance floor as well.  This photos is of Lars, myself and Lucas Bauer – Czech Olympic and World Champion
I plan to do a more inclusive recap of my European racing experience, World Champs included after I get home and allow some time for introspection…… in the meantime, It’s amazing how tired racing can make you – even if it’s just short races such as 2.8k prologues!
Directly after the mini-tour in Falun I traveled two and a half days back to the US to meet my APU teammates in Sun Valley.  The first couple of days here were spent trying to track down my ski bag which was missing for five days.  This included 2-3 hours on the phone with United, getting different answers from everyone I spoke with.  Not having your skis for a ski race is like a race car driver without a steering wheel, a chef without a frying pan or Sue Sylvester, the Cheer leading coach from Glee without a track suit.  (Kikkan successfully got the whole women’s team hooked on Glee!)  Needless to say, it was a super stressful experience and one that I didn’t need considered how tired and jet-lagged I was from the high density racing and International travel. 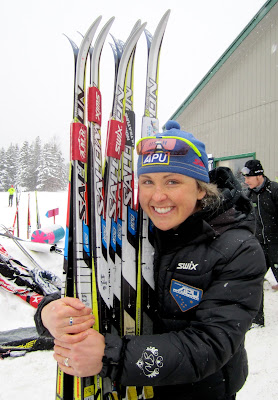 I LOVE my skis….
Alas, I got my skis and everything is good here in Sun Valley.  We’re had three races including the National Championship 30k, a 2.8k skate prologue, and a 10k Classic Mass start race.  We have two races left including a classic sprint and an uphill race up the local downhill area, Dollar Mountain.  I’m looking forward to the last races and at the same time, looking forward to going home for some rest. 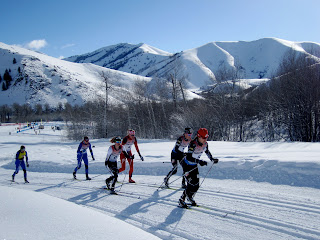 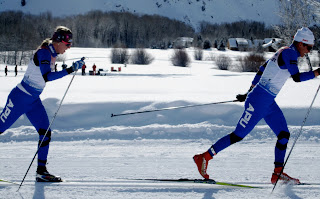 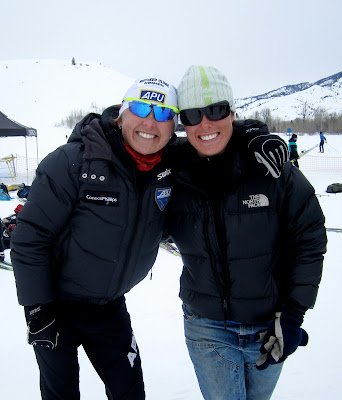 My sister Robin is here to watch, ski & hang out! 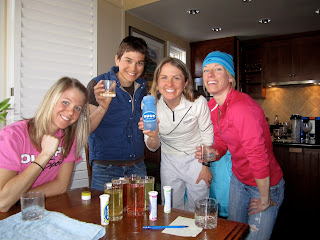 At altitiude hydration is even more important.  Yesterday we had a sport’s drink tasting which included a “NUUN” sampling.  If you haven’t tried this stuff, it ROCKS. No sugar, electrolyte replacement, and it tastes GOOD. 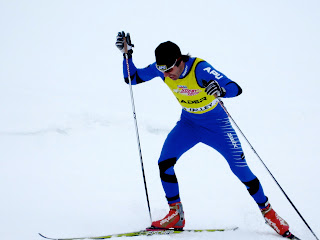 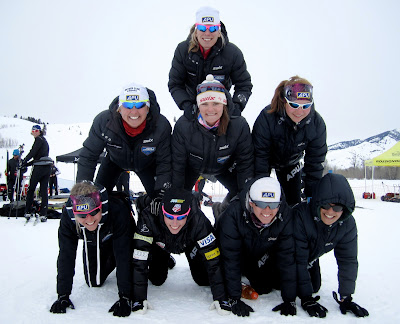 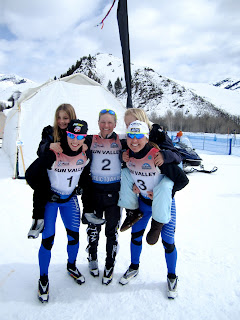 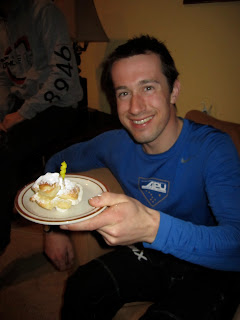 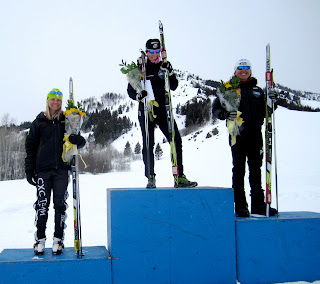 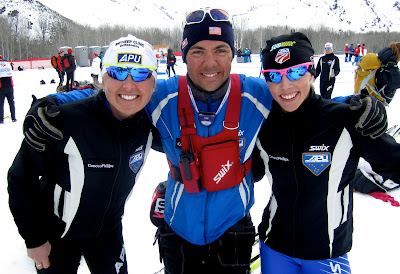 Me and Kikkan with Erik (our coach!)
One of the sacrifices skiers make is missing out on quality time with our families and friends.  Today is Rob’s 32nd Birthday and the third or fourth year in a row where I haven’t been able to spend it with him doing something fun.  Happy Birthday to Rob!!!
More later/thanks for reading,
Holly 🙂