Back on the homefront last weekend a group of us travelled up to Bretton Woods to see what it’s like to ski a longer race. It’s getting near the end of the racing season, and it’s a good time to lay it all out there on the line. Go ahead, dig yourself into a bit of a hole. It’s ok. And actually fun. The pacing for a longer race is such a different experience for our younger group, and a good feather to have in your cap when you step on the line for a 5k, or even your first 10k. Most of us weren’t up for the full marathon, but we all thought we could handle the 25k.

We had a nice easy ski on Friday. The trails were very scenic and the recent rainfall and snowmelt had the nearby streams roaring. We were also treated to a nice end of season Swix sale with good deals on some nice stuff. Mac scored with a cool Swix shirt. 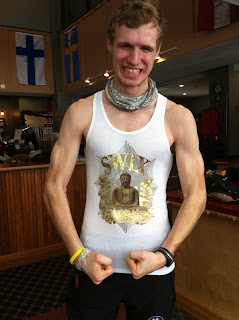 The Mt. Washington Hotel itself is such an awesome sight. After our easy ski on Friday I let the kids loose in the Hotel for awhile to explore. It’s such an amazing place – there’s even an old speakeasy “cave” downstairs. 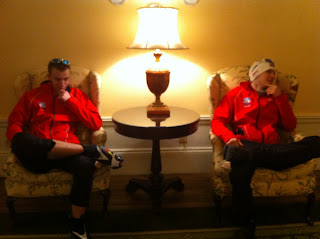 Mac and Nick contemplate the innate beauty and history of the Hotel.

Saturday we awoke to much better weather than we had expected – no rain – and actually a patch or two of blue sky! Fortunately temps overnight hadn’t dropped too much and the wax we had used the day before was something we knew would probably get us around the course. Thanks to John Ogden, Charlie, Rick Gordon and Jim Levins for doing the klister thing, in the parking lot, with the torch, and a bit of wind. If you’re a coach you know these times of cold and stickiness can, well, bring out the best in all of us 🙂 We waxed up 15 pair of skis in no time and jogged off to the start – no warm up needed 🙂

Sorry for no pics from the race. I was too busy trying to catch and stay up with Ben Ogden, but I can say that we all were smiling at the finish. John Ogden had to bring home a prize for his wife, so he had to win. Nick got second. Mac third. I managed a 3rd place in the women (thanks for the pacing Ben). Ben won his age group, Russell second. Koby first and Scott second for J3’s. MacKenzie won J3 girls, while Katherine, Tess and Chloe took a more leisurely time with it.

After, we were treated to a post race pasta lunch and awards ceremony. 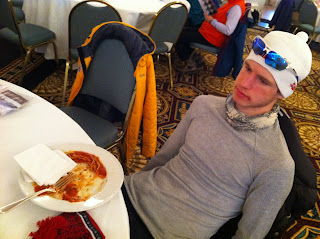 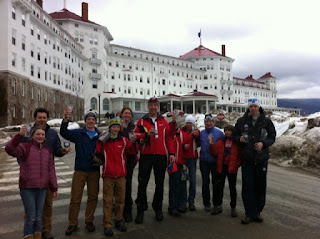 Here’s our group just before heading home. Lots of prizes in hand. Many thanks to the folks at the New England Ski Museum, Bretton Woods Resort and Touring Center for a wonderful experience. It’s something we want to come back to next year!

And The Most Improbable Comeback Award Goes To… The German Women