I noticed an interesting tidbit in a FasterSkier article the other day previewing today’s men’s 15km classic race. Towards the end, it mentioned that “Bauer also often does better in his first event in a major event.”

Obviously, Bauer had a pretty bad race today, his first of the event, but that doesn’t mean he didn’t have a streak going before this. That would be fairly interesting, so I thought I’d look up some data. Prior to this season, Bauer has participated in multiple races at 10 different championship events (WSC or OWG) dating back to 1998.

The following graph shows his results relative to his first race in each event, as measured by finishing place: 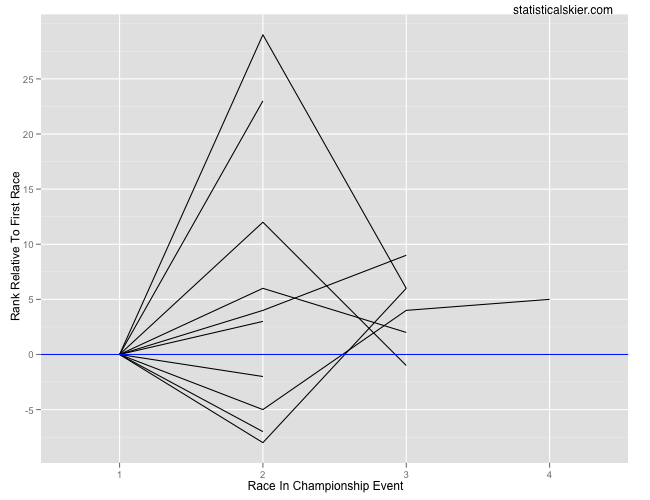 If Bauer tended to ski better in his first event in a major championship, we would expect most of the lines to travel above zero (blue line) as we move to the right. Instead, things are quite mixed. There are two instances where Bauer’s second race was much, much worse than his first (2005, 2009 WSC). But overall,there are five cases where Bauer went on to ski better than his first race and five times when he did not.

Just to check, here’s the same graph but instead of using finishing place, using difference in percent back from the median skier (standardized): 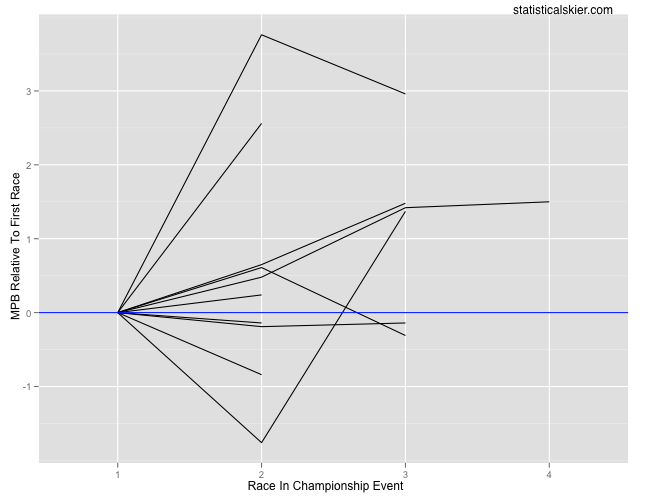 This measure yields the identical results (5 times he raced better than his first race, 5 times he didn’t).