There was a distance race this past weekend as well, of course, and in a slightly unusual format. I’m not sure why FIS includes these 10/20km pursuits; I can’t think of what the rationale is at all. In any case, here’s a look at the top men’s performances which included some slightly different names (click through for full version): 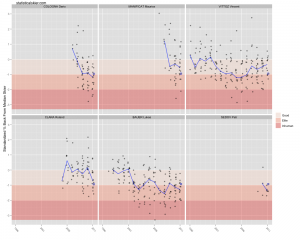 I noted when I posted the snapshot graph for this race that the FIS points may be particularly misleading. Obviously, the men’s field stayed very tightly packed right up to the finish, as Dario Cologna won the race with an effort only 0.96 standard deviations further away from the median skier than usual. You might think that this calls for further adjustments between mass and interval start races, but I’m not so sure.

In any case, a win is a win, so good for Cologna who had a terrible World Championships. A good day as well for France, and this race with unusually “bad” standardized percent back from the median was still quite good for Manificat and Vittoz this season. I mentioned previously that I had a hunch that the French men may tend to ski slightly faster late in the season, but that’s a topic for another post.

The women’s race played out rather differently: 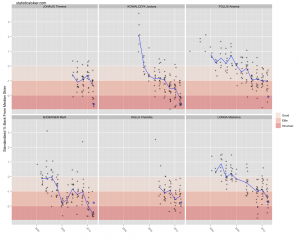 Another incredible performance from Therese Johaug (and Kowalczyk as well). After peaking quite well for World Championships, perhaps Marit Bjørgen is feeling a bit of a letdown; I wonder if she’ll pull things together for the World Cup Finals. (Yeah, yeah, she’s totally fallen apart, she was fourth!) Charlotte Kalla actually hasn’t had as strong a season as last year, so this race was actually pretty good for her. This was also one of the strongest races of the season for Arianna Follis, excepting a second place in a TdS stage.