I promised a separate post on Leif Nordgren earlier, so here it goes. I don’t really have any fancy analysis to present, but here’s his results in major international competitions (WC, WBC and OWG): 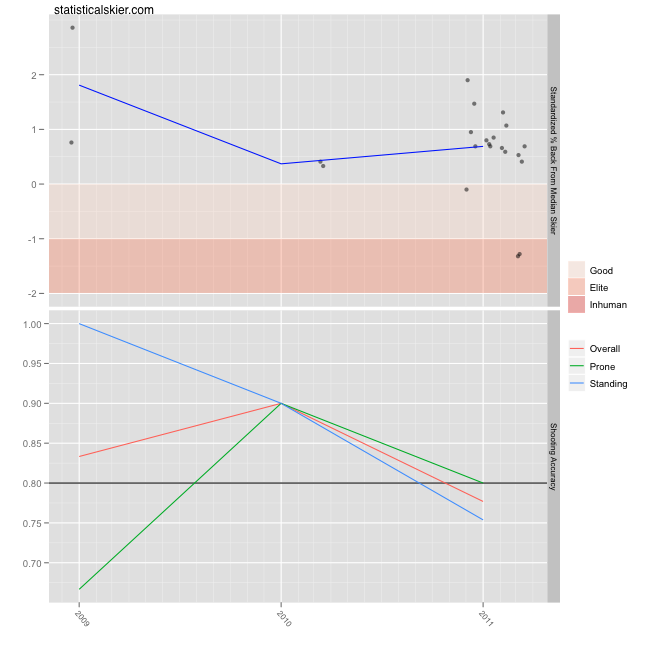 Obviously, the guy is young and this is his first season skiing on the WC circuit “full time” or mostly so. His two fantastic races at World Championships certainly attracted some attention, and rightly so. But I’d also note just how different those two races were from the rest of his results. Now, that’s not uncommon in biathlon, where a few more shots made here and there can easily move you up or down 15-20 places. I just wouldn’t expect him to pump out that kind of race on a regular basis, even next season.

However, you’ll also note that (if you look carefully) his result from just this season were steadily improving throughout the season it seemed. Not by a huge amount, perhaps, but it’s noticeable. That’s exactly what you want to see from a young guy getting used to international competitions. I would think that the best case scenario for him next season would be to have his results spending most of their time in the ‘Good’ section of these graphs, with occasional forays in ‘Elite’. He’s certainly an interesting guy to watch, though.

This got me wondering though about young skiers in biathlon in general. My age data for biathletes is much less complete than for cross country, since that information is harder to obtain in large chunks. I did my best to identify a few men under the age of 22 who raced in WC or WBC races this season. There were only a few people who appeared to do this more than a handful of times: 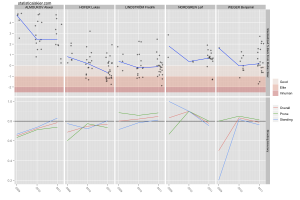 Almoukov, just so you know, is apparently Australian. Hofer, Lindström and Weger are pretty clearly at a different level than Nordgren. Of course, in those more competitive biathlon nations, my guess is that they have even more fairly talented youngsters who just aren’t racing World Cups and so the ones that are are really the cream of the crop. (I’m missing lots of birth dates for IBU Cup athletes, which is why I’m skipping that arena.)

Pre-race thoughts on the White Mountains 100