After the World Championships I remained in Europe for one last WC race, the Lahti classic sprint. The snow conditions changed drastically (from -8 overnight, to +4 by my race time). I took a bit of a gamble and raced with my hardwax skis instead of my warmer klister skis. Unfortunately the snow warmed up quicker than I thought it would and I had absolutely no grip. These things happen; next time, I will be prepared and have both skis waxed and ready to go.

I had almost no time at all to sulk over my bad race; I had to get from Finland to Canmore, as fast as possible, to race at Nationals in two days. I took a shuttle to Helsinki after the race and boarded an early 6am flight the next morning en route to Calgary.
In Canmore I was reunited with my parents and Austin. Then I quickly ate some supper and went straight to bed. I had been up for 26 hours and was hoping I could survive 3 races, in 4 days, over 9 time zones. The race the next morning was a 15 km Classic race, individual start. I had a great start; feeling good and skiing at a pace that I felt could win me a medal. Mid way through the first lap I got tangled with a skier that I was passing on the fastest downhill corner on the course. Somehow, my right ski went under this guy’s foot and I went down hard on the ice. I fell on the corner where ice had formed from a lot of skiers snowplowing to slow down.

After the crash I never got back into my rhythm. I was feeling some pain in ankle and shoulder. I skied hard right after the wipeout to try make up for lost time and I started to blow up. I was unable to recover on the downhills and suffered right to the finish. What started as a great race, turned into a big disappointment. I finished 12th along with a sprained ankle, a subluxed shoulder, and a bruised hip.
With the sprint race the next day, there wasn’t much I could do about my injuries. I iced both my shoulder and ankle and hoped that they would feel better by the morning.
I woke up at 3 am because of the crazy time change from Finland. My ankle felt noticeably better but my shoulder was still very sore.
While warming up for the sprint, the shoulder felt pretty good, if I kept the movement very linear. If this was a skate sprint I am not sure if I would have been able to race. The twisting arm motion would not have agreed with my shoulder.
The sprint went amazing. I won the Qualifier and made it to the A-final without too much trouble in the heats. I had some energy saved for my attack in the final. I started my attack just before the steep hill mid way through the course and didn’t let up until the finish. My mom put together a quick video of my A-Final.

For the second year in a row, I am the National Sprint Champion! 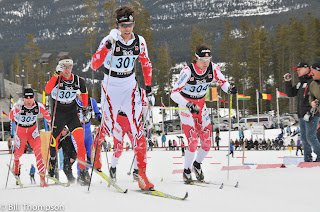 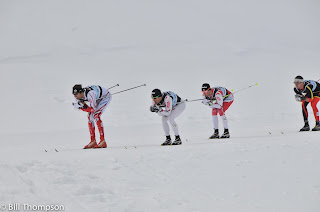 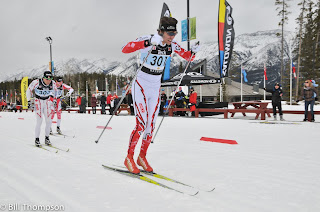 My season has come to an end. This has been such a fun season for me. I spent almost the entire winter training and racing in Europe (18 weeks). It has been amazing training/racing with my teammates and sharing memories with all of them!

I would like to give a huge thank you to my coaches Justin and Louis for giving me the amazing opportunity to race 8 World Cups and a couple of Scando Cups this season. I can honestly say that I have learned something from every race, the good and the bad.

I’m really happy with the results I’ve had in my first WC season. It goes without saying that those results were made possible thanks to the super team we have travelling with us. Thanks to Sacha, Godefroy, Eric, Ives, Joel J, Joel K, Micke, Peter, Graham, Wolfman, Scott, Shane, Tom, Alain, Andre, Lee,  Dr Reed, and so many more.

I’m taking a break in April (with a couple of weeks of windsurfing in Hawaii) and will be ready to start training again in May.