It has been just over a week since the final 50km race at Nationals in Canmore. It has given me lots of time to digest things, and make decisions regarding the rest of the season. In short, just over half the Academy athletes woke up this morning at the crack of dawn and headed south to Sun Valley for the USSA Spring Series races. I decided to stay in Canmore and start my spring R&R a week early. Before getting into the details of that though, lets back up a week or two and discuss Nationals!

I had high hopes for this race. It was my first race of Nationals as I decided to sit out the team sprint to be better rested. Gorgeous day, tough course, tough result. Legs didn’t feel fresh, and I knew from the top of the first hill it was going to be a fight to stay in the top ten. I ended up ninth after leaving everything out on the course. I can easily say that was the hardest race I have ever done. 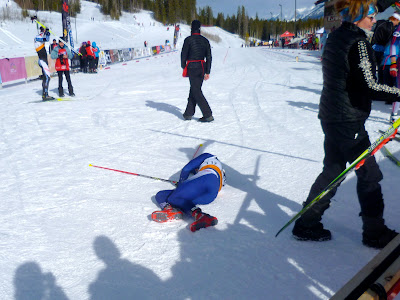 After crossing the line in the 10km Skate. First time I have fully collapsed after a race and needed help getting my skis off.
Photo: Paula Hanson 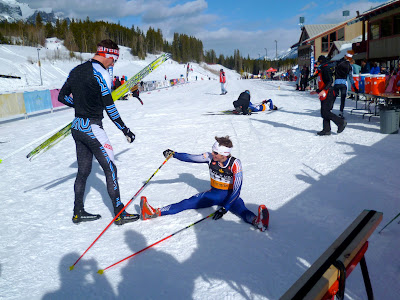 Still down… congratulating David Greer on his race. It was a while before I got up and headed back to the wax room!
Photo: Paula Hanson
15km Classic – 23rd
This race was one to finish and forget. The 15km individual start classic race was held on the biathlon trails which are much more rolling than the World Cup trails. It was a warm day, slightly overcast with tricky snow that all wax techs fear. Our team was prepared though, with both a klister ski and a hard wax ski ready for each athlete. The big question was which ski to go with? Our start was right around the transition point. Half the team went with hard wax skis and half went with klister. I was one of the ones who chose klister, hoping that the sun would continue beating down on the trails and glaze the tracks. Unfortunately after the call was made and I had started the race, the sun disappeared and the snow stopped changing. I was left with good grip, but very draggy skis. This just hindered my already poor performance. This race hurt a lot less than the 10km skate, but that was probably because the mind wasn’t pushing the body as hard. It was a more consistent race in terms of lap times, but the common theme of SLOW remained throughout the race.
After the 15km classic I took a day completely off to think about why it had gone so poorly. I had been training consistently well for the last three weeks, but the body always felt the same no matter what. Whether I had raced or rested the day before, I always woke up kind of tired and never fresh. During intensity and the previous three races, the feelings out on the course were also similar: no snap, speed or pop. All consistently mediocre. I decided I needed a change of pace, as the rest/intensity/race program clearly wasn’t working. So the next day I headed out for a nice long, slow, 3 hour classic ski. I know my body responds well to volume, and I was hoping this long ski would give me the kick in the pants I needed, even though it was only 2 days out from the 50km…
50km – 5th!
I put some pressure on myself for the 50km. I was having a dismal Nationals, and was far from reaching my podium goal, let alone the back up “Top 5” goal. Today was going to be the day and I had five 10km loops to make it happen! An 8:30am start meant an early morning, but it also meant fast frozen snow for much of the race. My plan was to stick with the lead pack, try to conserve as much energy as I could and ski relaxed. The race started and I did just that, shifting between the top 5 for the entire race. 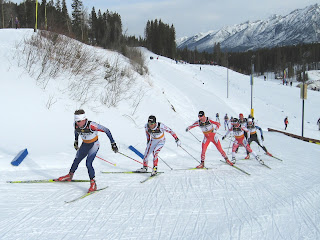 Nothing exciting happened from km 0 to km 45. The pace stayed very consistent with people shifting in and out of the lead doing their fair share of the donkey work. There were no breakaways or surges, those that couldn’t handle the pace simply fell off the back. At 45km George picked up the pace and Brent and Kev hung on. Glenn Randal was next in line, then Somppi and me strung out behind him. During the last few km I pulled up my knickers and tried to close the gap back down to the leaders. Somppi held on and we passed Glenn but weren’t closing any ground on George. It came down to a sprint finish between Somppi and I and he took it. I was spent after the last big push, but was very satisfied with 5th! 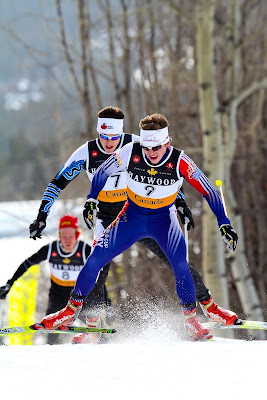 Michael Somppi and I hammering up the last climb after 49km….
Photo Credit: James Cunningham 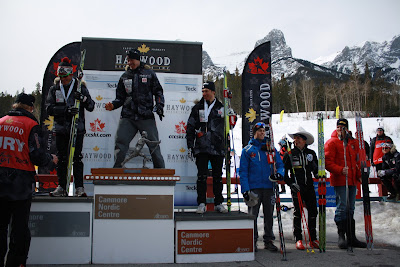 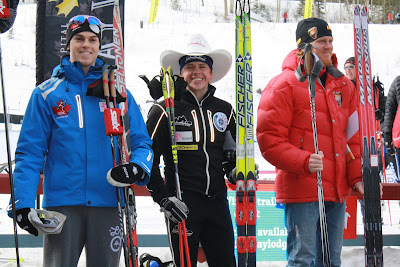 The 50km was definitely the highlight of Nationals for me. I got my top 5 and was fairly close to the podium (26 seconds off Kev… over 50km) The cheering and support during the race was incredible. Thanks to all those that came out and cheered!! My mom and brother came out for the 50km, and hearing those familiar voices over and over again throughout the race definitely gave me some more drive.

NOPE! I am in Canmore as I write this, with my feet up and thoughts of going out for some downhill turns in the sunshine this afternoon. After much thought I decided it wasn’t worth it to go down and bury myself in another 4 races. Sure, it would be good for development, but I have struggled to find energy over the last three weeks and the thought of expending what little I had left over another week wasn’t to appealing. To stay in Canmore, rest, enjoy the mountains of snow and make sure I am rarin’ to go come May 1st seems to be more along the lines of what I need.

Stay tuned for pictures of upcoming Canmore adventures! There will be lots, and hopefully I get a chance to put the camera to use.

Emma gets home from biathlon Nationals tomorrow! She has had a very strong Nationals with a 3rd in the individual, a 3rd in the sprint, a 2nd in the pursuit and a 1st in the team relay today! 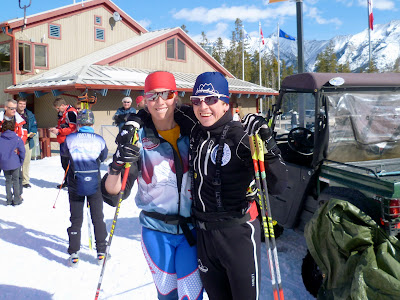