As far as I can tell, Magdalena Neuner leads all currently active female biathletes in victories in major international races. (Update: As pointed out to me in the comments, that isn’t exactly the case. All I meant to say was that I hadn’t adjusted the counts for number of races or number of seasons. My bad.) By my count, Neuner has 24 wins, Andrea Henkel has 20 and then you have to go to Helena Ekholm with only 13 wins. And check out her standing shooting in the following graph: 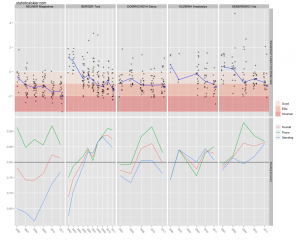 Yikes. She really doesn’t shoot well standing, although it’s dramatically improved over the last several years. Can you imagine what sort of crazy, Frankenstein-ish super biathlete you’d get if you could combine Neuner’s skiing with Helena Ekholm’s shooting?

In any case, this race seemed fairly close, all things considered, in that the field wasn’t too spread out. How about the top few men: 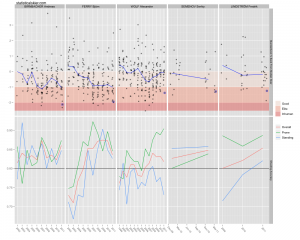 Birnbacher and Ferry gapped the field a bit, but not by a huge amount. Birnbacher’s typical race (blue line) has definitely improved over the past two seasons; Ferry’s has improved slightly this season, but is notable for how consistent he’s been for five seasons now. Alexander Wolf had a great race for a season that’s been another in a sequence of steadily slipping performances. It appears that his standing shooting has slipped as well. The other two folks in the top five are relative youngsters.