Nothing in depth here, just a quick look at how the US and Canadian results at these past World Champs compare to past major championships (OWG and WSC). First is a look at the distance results, using standardized percent back from the median skier, and the blue line representing the median performance over time: 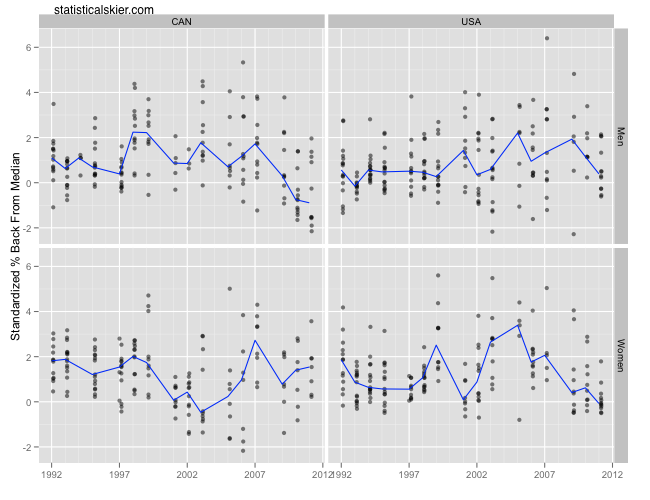 For the US women, their best performances weren’t much better than recently, but their median result did improve somewhat. That would point to a slightly deeper squad, if not a faster one.

Despite no big headline results from Kris Freeman, the US men still had a better showing than Vancouver, and a better team performance than the previous WSC (minus a good result from Freeman, of course).

The only modest improvement of the median result for the Canadian men is mostly the result of George Grey not skiing out of his brain like he did last year at the Olympics, and Kershaw getting sick and missing the 50k. He may not have been quite up with Harvey in that race, but I’d bet he he would have skied fairly well.

Not a terribly impressive WSCs from the Canadian women in the distance events. They’re still rebuilding and hopefully it won’t take too many more years.

The sprint version of these plots are a little silly, since there’s only one sprint race per event, so the amount of data is dramatically reduced. Still, for completeness and comparison: 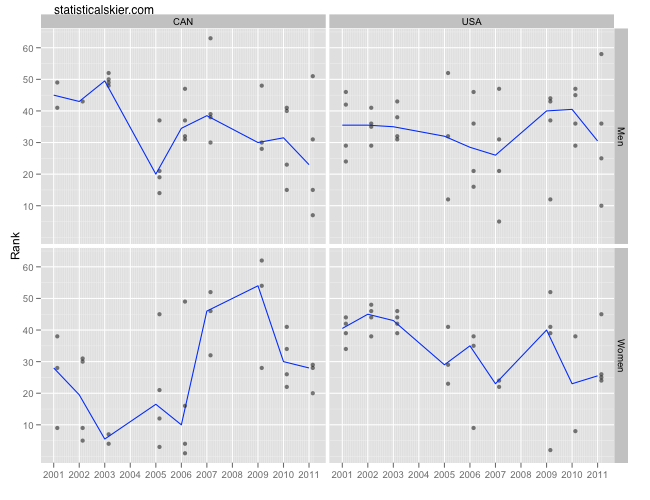 Keep in mind that the blue trend line is tracking the median of only 3-4 values at a time. So you might just be better off looking at the points themselves.

The US women were of course missing a big result from Kikkan Randall, but it was nice to see a few others in the top 30. The US men saw some improvement, thanks to Andrew Newell not falling and some better qualifying efforts by a few others.

The Canadian men’s sprinting just keeps improving, and with promising folks like Len Valjas coming up, it’ll be interesting to see how they develop.