It’s really some of the women’s performances that I want to call attention to, but let’s start with the men’s 20k individual race from the other day. Here’s the top five (click through for full version): 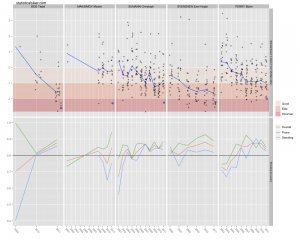 Another impressive race from the youngster Tarjei Bø. But as you’ll note, not a wildly dominant race when measured by standardized percent back from the median. In the ‘Inhuman’ territory, to be sure, but it isn’t until things start getting below 3 standard deviations better than the mean that things really start getting extreme. Maksimov’s race mostly came out of nowhere, though he did have an equivalent performance several years ago. Christoph Sumann’s season (and the one before) has been a small step backwards it seems, in terms of his median performance, but he certainly still dangerous.

As for the women’s 10km individual race: 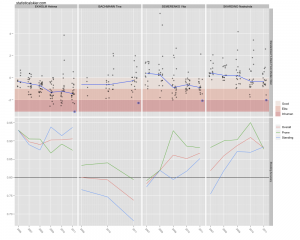 A couple things are notable here. First, Ekholm’s race just sneaks into the really, really extreme territory of being more than 3 standard deviations better than usual. It’s not hugely different from her typical performances, but it’s still notable since if we add it to the impressive display that Neuner and Mäkäräinen put on in the sprint and we have the 5th (Neuner), 8th (Mäkäräinen) and 9th (Ekholm) most extreme performances by a woman since 1992.

Also interesting is that Tina Bachmann skied so well despite her shooting really taking a dive this season.

Crawford Ends Worlds with "Experience of a Lifetime"