Another ideal day in St Moritz.  Course inspection is complete having skied each half of the race course the past two days.

The course is groomed impeccably, start to finish and we still haven’t seen a single cloud.  Unfortunately, the forecast is calling for 2 to 5 inches of fresh snow the night before the race which could make waxing a little tricky.  We’ve run into quite a few of the 84 total Americans competing in the Engadin this year. 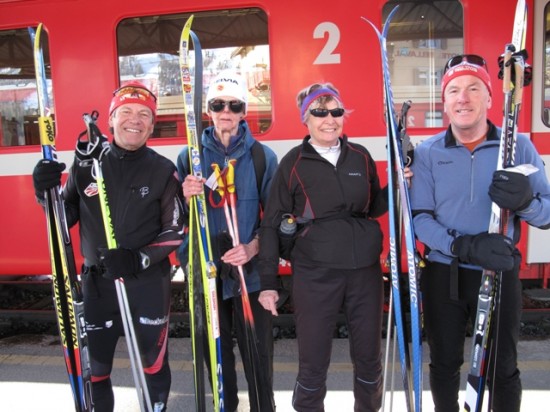 four of the 84 americans in the engadin this year

So far, everyone has asked what the best wax will be.  Given the snow in the forecast and the temps hovering around 32 degrees F, I’ll be waxing with a Toko HF yellow/red 50/50 mix and Jetstream on top of that for a little extra speed.  For kick, I’d recommend a thin Toko green binder (not sure how long you’ll be on the course), followed by a 4 – 5 thin layers of Toko red kick wax.  If you think you’ll be on course for a while, toss a yellow and silver into your bag to re-wax as the temperature warms throughout the day. 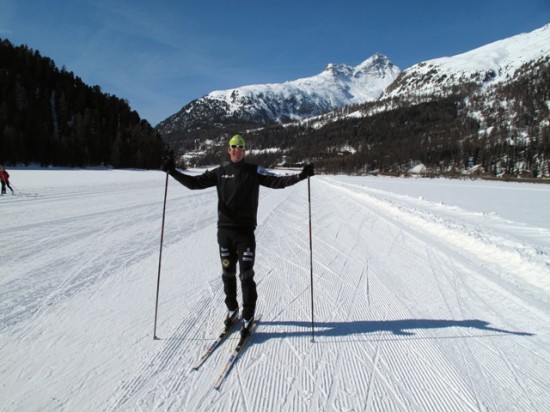 The corduroy and tracks are perfect.  There’s room to ski at least 10 skiers wide across the lakes during the first 15km of the course!  My favorite part of the course, hands-down, is Mattress Hill.  It’s a long, glade style descent through the trees dropping from St Moritz to Pontresina at the 20km mark.  The trees are covered with mattresses, but there will surely be some epic collisions during the race!  Here’s a little preview. . .

When we’re not skiing, we’re enjoying some great food and company.  Last night, we joined a group of Don’s friends from Hecklingen, a small town in Germany’s Black Forest.  We ate at the Scaletta, a classic Swiss restaurant in the village of S-chanf, located right next door to one of the many homes of Italian Prime Minister Silvio Berlusconi.  The Scaletta’s owner, Mario, remembered Don from the last time he stayed there over 5 years ago and was a great host for our dinner. 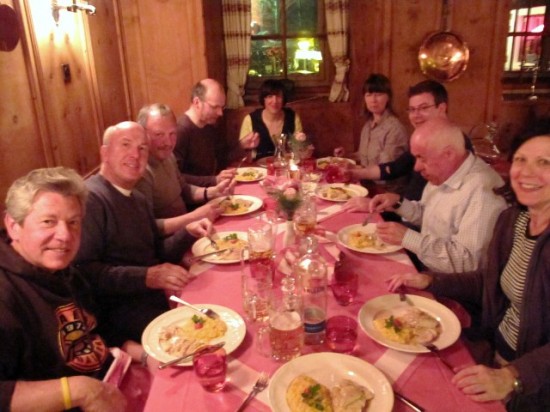 the crew from wisconsin and hecklingen

While the whole group spoke great English, I occasionally played the role of translator.  I realized how tough translating can be when, at one point, I turned to ask Don and Jim a simple question.  They looked back at me blankly and couldn’t answer the question.  After a moment of waiting for their response, I realized I’d been speaking to them in German!  They haven’t let me forget that one anytime I try to tell a story or ask a question.

Aga Bednarz, the fourth (any by far the best looking) member of our crew, arrived last night.  Now we’ve got the whole team in St Moritz and ready for the Engadin on Sunday.  We’re taking a rest morning today, getting caught up on the internet and sights.  This afternoon, we’re off to Muottas Muragl for some sledding.  Don’s already trash-talking his ability to set the new land-speed record on the descent!