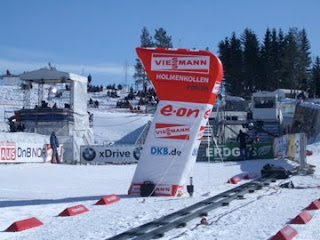 Oslo-Holmenkollen finish line – the end of a long but fantastic season!

The season is finally over; “finally” in the sense that it has been a long one, not to say I’m relieved to see it done. While I’m certainly excited for some down-time, this has been an amazing season. I saw a huge jump in my results and have readjusted my perspective and goals in a positive way. I’m leaving this season behind more motivated and energized as I look towards the seasons to come. This is just the beginning of an exciting road to Sochi. 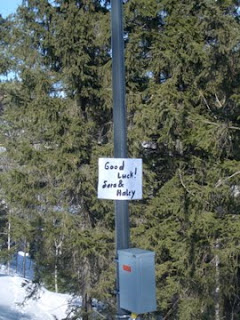 A fan’s Good Luck sign for Haley and me in Oslo before the mass start.

That said, I’ve taken the typical post-season road and promptly became sick as soon as I arrived home in Boise last week. The good thing about being sick in the off-season is that you don’t worry about it, the bad thing is that you don’t feel good when you should be out enjoying all the things you don’t get to while racing. There are worse things than spending your days drinking tea and cuddling up on the couch with a book.

Already I’m looking towards the coming training season, though. Things will ramp up with a camp in Lake Placid in May, though training will begin before then on my own. Until then, though, I’ll be enjoying my time off-sleeping, reading and just generally relaxing!