The women’s sprint race on Saturday didn’t see quite as many unusual faces at the top: 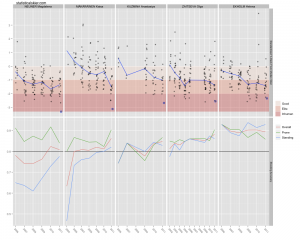 Overall, Magdalena Neuner appears to have slipped a bit this season, but she put in an excellent performance on this day. Kaisa Mäkäräinen has really made a jump this year, both in her overall performance level and her shooting. Those two shot clean and were well clear of the field. In fact, they both managed standardized percent back from the median values below -3! Very, very impressive. Neuner’s race is the 8th most extreme that I have on record, men or women.

The US women had just a so-so, it seems: 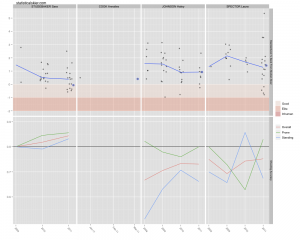 As you can see, I don’t have many major races (WC, OWG, WBC)  for comparison with Annalies Cook. Sara Studebaker had a decent day, but Haley Johnson and Laura Spector had only OK races; not terrible really, just not as good as they’ve had earlier this season.

Day one of the Sparkling Hill Masters World Cup