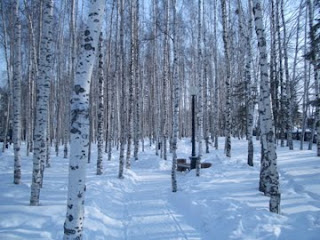 After a strong relay performance, I was looking forward to the sprint and pursuit races this past weekend here in Khanty-Mansiysk. After missing 3 in my sprint race and crossing the line already 3:25 behind the leader, though, I thought my chances for even making the pursuit would be slim. Usually, around 2:00-2:30 behind is the normal top-60 margin. But apparently the course here in Khanty is anything but normal, and as the race wrapped up, I stayed 3:25 behind and landed in 48th place. Not where I was hoping to be, but to make the pursuit without having a great race was solid.

Unfortunately, I was not the only US woman to suffer from a less-than-stellar result. Only two of us made the pursuit, and the team had to work hard to look for the positives and re-group for the coming races. For me that meant right away. Sunday’s pursuit was much colder, and like Ostersund, I opted for some face tape to keep cold and frostbite at bay. Starting so far back was tough: while the sprint loops are 2.5km, the pursuit loops are only 2km, and markedly easier. The 2km cuts out one hill entirely and significantly shortens the climb into the range. In the relay, the loops were taking between 5 and 6 minutes. I knew shooting would be key with the short loops and the already large margin I would start behind. I skied solidly and with only 4 penalties, managed to keep from being lapped by the leaders and move up, finishing 38th and gaining a couple more World Cup points. In the end, 14 women were lapped, proving again what an strange pursuit this was. I was very glad to shoot better and finish within the points, and though it was not my best race, the result gave me some confidence as I look forward to the rest of the races here. 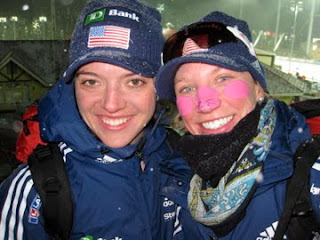 Annelies Cook and I after a cold pursuit. Pleased with the effort but ready for a rest day!

Many times this season I’ve had the chance to reflect on how far I’ve come in just one year. One of the best examples is the first half of this World Championships. In the sprint, with three misses, I placed 48th and was not satisfied. Then, I shot 80% in the pursuit and moved up to 38th and felt it was simply a decent race for me and a good comeback considering how far back I had started. Last year at the Olympics, missing 1 target in the sprint race, I placed 45th and was ecstatic. And then, shooting 90% in the pursuit, I ended up in 46th place. It’s great for me to see the change in my expectations and ability, but every once in a while I must remind myself that just last year simply getting World Cup points was cause for celebration. Before this season my best result had been 34th in the Olympic Individual, and so far this year I’ve had 8 results better than that one. Things are certainly heading in the right direction! 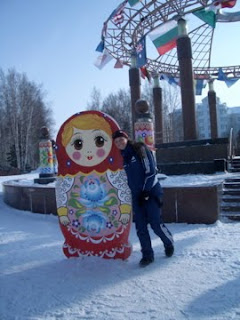 Huge, brightly colored Matryoshka (nesting) dolls are positioned all around the town square. 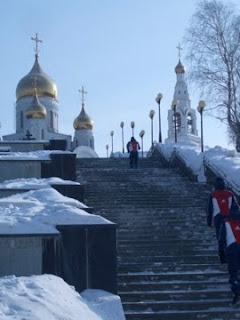 Coach Jonne getting in his “Rocky” workout…the rest of us opted to walk up!

Tomorrow is the 15km individual race. I feel ready and confident, but without pressure. I know this year has been great for me, and to prove it again here at World Championships would be fantastic. But that’s not the focus. Tomorrow’s goal: have fun and enjoy the experience, whatever the outcome. 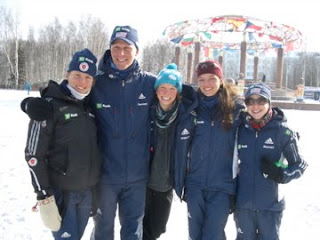 USA women with Coach Jonne Kahkonen, enjoying the sun on an off-day exploration of Khanty-Mansiysk.