Another day, another impressive win for Petter Northug. I didn’t get to watch this race, but so far no one has figured out a way to break the race up prior to the final few kilometers. I’m not sure the pace was exactly slow, but there was certainly a ton of skiers packed close together. All my posts this week will be on the brief side, so here’s a graph for the top men (click through for full version): 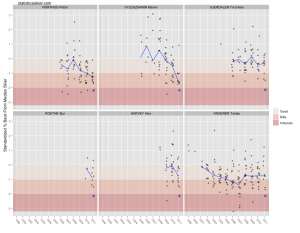 The field stayed relatively compact it seems, as the leaders just barely touched the ‘Inhuman’ range.  I”m sure Alex Harvey was disappointed to not be on the podium today, but that was still an impressively good race for him, all things considered. It was interesting to see Tobias Angerer near the front as well, since his season has been a rough one. But if that’s largely been due to illness, he might be fairly strong for the final few weeks of the WC schedule.

And here’s a look at the other North Americans: 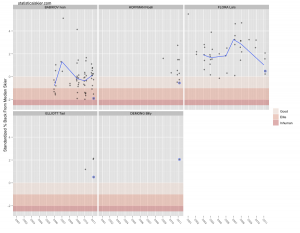 Babikov has not had a great season, but he seemed to find his old form in this race. Maybe he’ll be able to carry this forward for the rest of the season. Hoffman, while ‘only’ in 30th, had probably the best race of his career, by this measure at least.

Billy Demong’s presence in this race caused a bit of a stir. Again, I didn’t see the race, so all I have to go on is where he ended up at the moment. I might look a little more closely at the splits later in the week. He did have to work his way through a lot of skiers, but at the end of the day he’s still more than 7 minutes behind Hoffman. Honestly, I’m not sure what to make of that. Personally, I was never one of the folks who thought that the NoCo guys could just drop into a XC race and kick butt. At least, I doubted that they’d be noticeably faster than the non-Kris Freeman men. But it’s hard to tell when the race they do is a 50k, which isn’t really something they train for. I’d be more curious to see Demong do a 15km freestyle.