FasterSkierApril 10, 2011
With one race to go I held the purple distance leader bib by 7 points. The final race was a big one. Double Points. Super Tour Finals. The distance title and $2,000 would be decided by the 4km, 250m vertical race up Dollar Mountain in Sun Valley, Idaho. 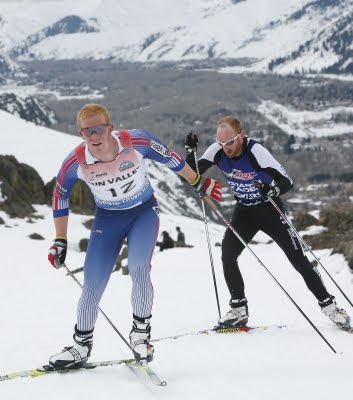 Red Heads Climbing up Elkhorn Mountain: Matt Gelso and Brian Gregg Photo: Nils Ribi
The hill climb is a race I have been visualizing in my mind all season long, but in particular theses last 4 weeks of training. I had my race plan dialed for the pursuit start on the final day on the mini tour. There were several races going on that day, but I was focused on the standing for the hill climb alone. 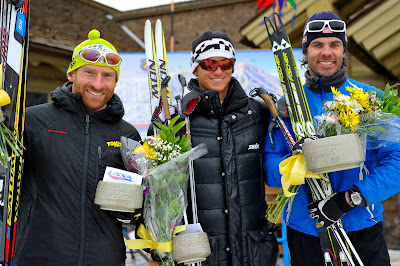 Super Tour 2011 (Distance Champion Brian Gregg, Sprint Champion Mike Sinnott, Overall Champion Lars Flora) Photo: David Wheelock
The race went perfect. I went out hard for the first 500m, then brought the pace down and settled in to my red line. I received some splits on Lars who started ahead of me that I was leading by 15 seconds at the halfway point. I pushed it hard a bit early but crossed the line knowing it was a great race. I finished 3rd on the day, just behind Kris Freeman and my teammate Tad Elliott. This was a great race for me and I am very happy to end the season on such a positive note. Now it is time to relax and recover from training. Wedding planning is on the agenda.