Alison and I hit our one-year dating anniversary on Friday, while spending the weekend in Walla Walla with my family celebrating my mom’s birthday. Since being together (and being close friends the two years prior), we’ve settled into a great life together. I have realized these last few months, beyond a doubt, she is who I want to be next to for the rest of my life. So, gathering up my Grandmother’s engagement ring from my sister who’s been keeping it close, I took Alison for a run last night up Spokane Gulch. At the top, as the sun was setting over Silver Star Mountain, I asked.

First she asked if I was serious.

I said yes, I was serious. Look at the ring in front of you. Then she saw it, and all was well. No pictures, sorry. I thought I had left my camera in town but upon returning home found it on the bookcase, so we got a post-action shot: 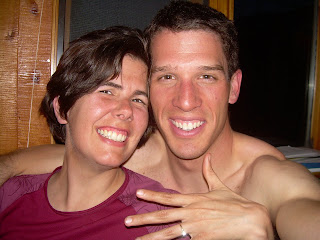 Given the schedules we both have with racing (she races through September, I begin in November), the wedding will likely be next summer sometime. And it will be in the Methow. Beyond that, we have no idea. The only sure thing besides the fact that we’re gettin’ hitched is that in a few years (barring my ascension to World Cup Champion), there might be a few lil’ Sams running around. Look out, world!