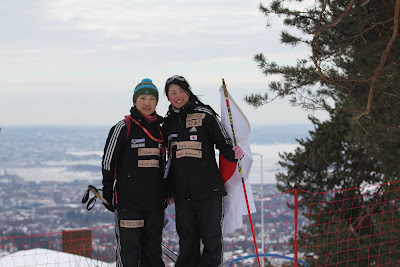 (Photo courtesy of Detlef Ekert www.rumgammelen.de)
During the races in Holmenkollen Itsuka Owada and Fuyuko Suzuki cheered on teammates and took advantage of international media coverage by taping, “Thank you for relief donations” in both English and Japanese to their team uniform.
The earthquake and tsunami in Japan definitely had an effect on me while racing in Oslo the following week. I could not help thinking about the Japanese team and the loss and devastation that they soon would fly home to. I do not personally know the Japanese team that competes with us on the World Cup circuit, but my heart still goes out to them: Natsuko Abe, Naoko Azegami, Itsuka Owada, Fuyuko Suzuki, Saturo Abe, Kazuya inomta, Junji Nagai, Hidenori Isa and their staff.
Once home, I had the opportunity to ski with the Lake Placid Elementary School’s gym classes, and in particular the 4th and 5th grade classes I had been visiting all year. I of course enjoy skiing with them and talking to them about the sport’s benefits and where it has taken me. But, I also really enjoy using it as a vehicle to look at the world in a different way, a perspective which can most easily be shared with a group of attentive kids fresh in from a ski themselves. I snagged that opportunity when their ears were open for new ideas after our our ski to talk to them about the current events in Japan and about my involvement with Skiers Helping Japan. 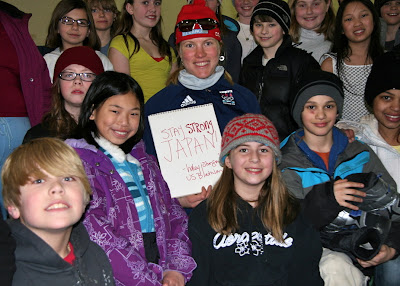 (Photo Courtesy of Matt Young, LPES Gym Teacher)
I decided to contribute to Skiers Helping Japan by donating some of my World Cup point earnings from this season – in particular what I earned during the World Cup competitions in Norway just after the March 12th earthquake and tsunami. It felt right to share this information with the classes because they too are contributing to the relief efforts. One of the Elementary teachers set up a box in the office for the school kids to collect coins that will be donated to the Red Cross for Japan. 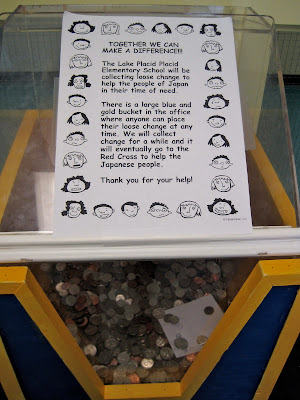 Another thing I enjoy are the international paper selection on the final flight home out of Munich, Germany at the end of the season.  A 9 hour flight offers luxurious amounts of time to catch up on the world’s news from cover to cover in English. I came across an interesting Opinion piece in the Wall Street Journal written by the chairman, CEO and President of Sony Corp, Howard Stringer. Mr. stringer talked about Japan’s shared sense of community and the spirit that arises from it, especially in times of disaster. The phrase fukutsu no seishin, which means never give up, describes this spirit and the character of Japan at this time. Stringer believes it is the country’s instinctive ability to never give up that will help them endure and to rise above the absolute devastation the earthquake and tsunami created with “grace, generosity and common cause.”[Stringer, Wall Street Journal, March 21, 2011] I hope so too and in my note that accompanies my donation I chose to write: stay strong Japan. 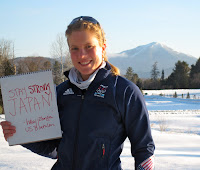 I’m one of many skiers who have joined in the effort. You can read about the Men’s Norwegian relay team who donated their World Championship Relay earnings to Japan here: Norway Donates.
If you are interested in learning more and would like to help go to: www.skiershelpingjapan.com
The latest update from the newly formed organization is that they continue to seek out local charities to donate to instead of the larger organizations involved in large scale relief effort.
fukutsu no seishin 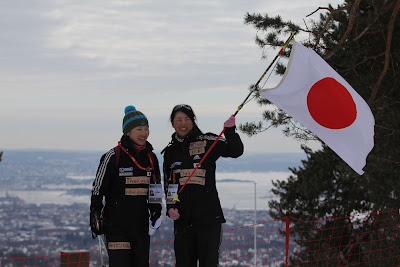 Sinnott Takes The Win, and the Cash, In Sunny Sprint