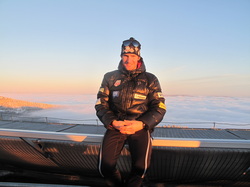 Holmenkollen ski jump Oslo Norway
The season was over for our team on March 15th as we finished our last competition in Lahti, Finland. Our Team had just over two weeks to recover and do what we pleased. For many of us, we went home and spent time with family and friends. Others went on vacation, but I traveled enough during the winter and just wanted to stay in one place. After the season, I went to Steamboat for the first ever Ski 4 Yellow Event. It was a fabulous of an event and I had an absolute blast. Also while I was there, I had many powder days with some friends as Steamboat hit the 400 inch mark of fallen snow on the mountain. It was a very nice time in Steamboat, but I soon had to return to Park City to start preparing for the 2011-2012 year.

Its crazy to think that I am getting ready to start the 2012 season tomorrow. We won’t be starting with an easy training. Instead we will be doing physical testing that demands the utmost power, strength, and endurance. That will give the coaches the base for  what to look  for in the summer and leading into the winter. This season will starts our preparation and building towards the 2014 Winter Olympics.

For me this spring will be a very fun filled but busy spring. Most of our team has decided to change things up and race road bikes this spring and most of the summer. It will be a different way for us to train but also to keep us motivated on working towards the winter. I will be racing for Colesport here in Park city, Utah with Billy Demong, Bryan Fletcher, Nick Hendrickson, Brett Denney, and Biathlon athlete Jeremy Teela. I have found cycling a good way for me to cross train as it uses strength and endurance in the biggest way. It is also easy on the body as it doesn’t have the pounding on my body as  running.

As far as our training camps for skiing, it will mostly be the same. We will travel to Steamboat a couple times, and Europe a couple of times to mix things up and get the low altitude jumping and cross country training you need. I really look forward to see what progress I make this spring and summer as I look forward to next year! Stay tuned as there will be a lot happening this year!