A very brief note appeared on FasterSkier the other day noting that Canadian Dasha Gaiazova has apparently been removed from the World Cup team. No one would comment because apparently an appeal is underway, so I don’t imagine we’ll hear much about it until that process has played itself out.

My impression has been that Canada has a considerably more involved set of criteria for their team selection, with very specific levels that athletes need to reach. At least, compared to the US, where objective criteria are certainly used, but “coach’s discretion” comes into play quite regularly.

I’m not going to try to parse all the various selection rules they use and try to match them up with her results last season. That seems like something better suited to the crack reporters over at FasterSkier. But let’s just take a look at her results and see if any obvious problems stick out. 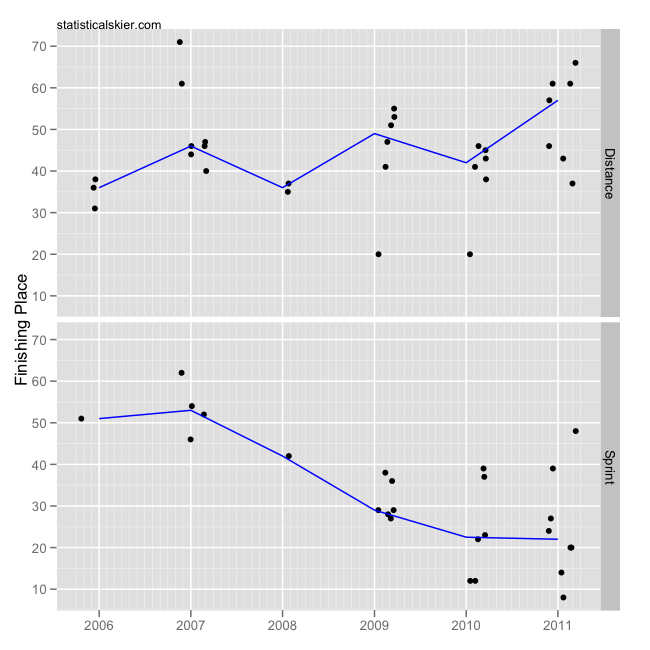 These are just her WC, OWG and WSC results, using the simple measure of finishing place, so that we can look at distance and sprint results at the same time. The trend of her distance results isn’t terribly inspiring, but I’ve never thought that she was expected to produce results in those events anyhow.

Her sprint results have certainly been decent the last two seasons. She had an 8th and 14th last season and two 12th’s the year before that and then a handful of times she’s qualified but not made it past the quarterfinals. Is that good enough to meet Canada’s objective criteria? I honestly don’t know…

What if we compare Gaiazova to other Canadian women? How does she fare against them in distance events, which are not her specialty? 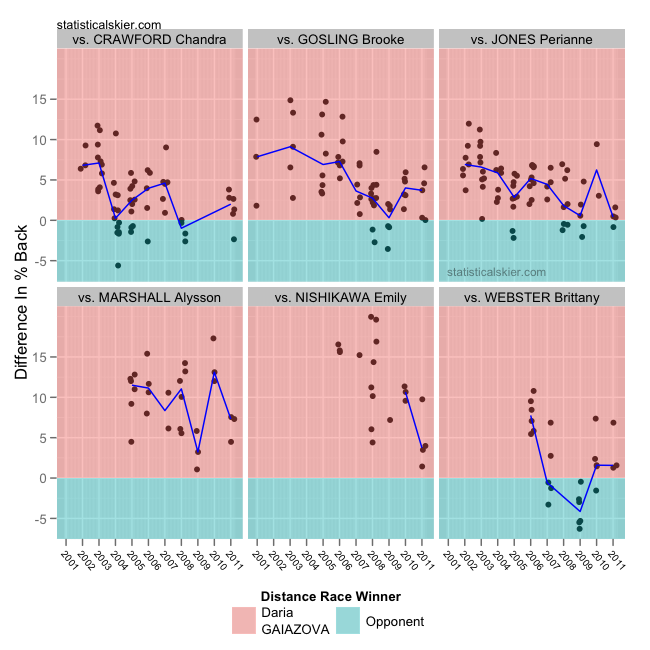 This graph is comparing Gaiazova with a (certainly not exhaustive) selection of other Canadian women. Each dot represents an instance of Gaiazova racing directly against that skier. Values above zero mean Gaiazova beat that skier in that race.

So she does fairly well against other top Canadian women, even in distance events. How about in sprinting? 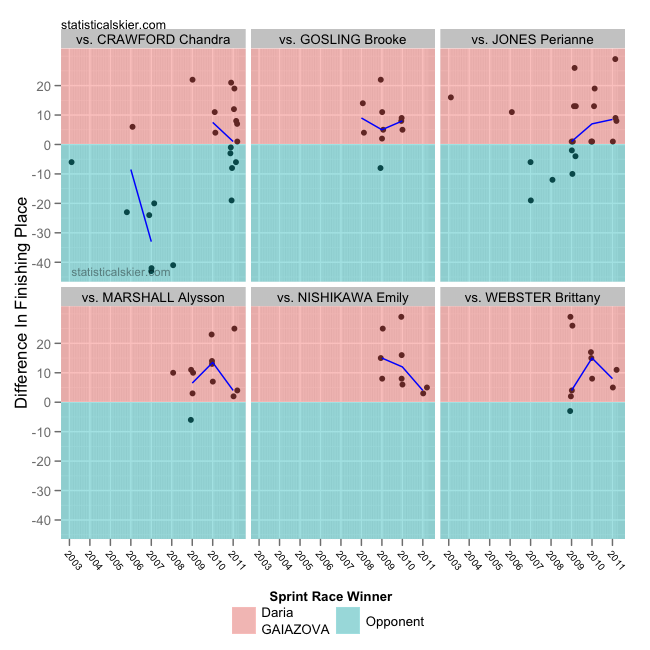 She had a moderate, but not overwhelming edge versus Chandra Crawford last season, but at least recently she hasn’t had much difficulty against any of these women in sprint races.

I want to be clear that I don’t know the specifics of Canada’s selection criteria, or even if the objective criteria was the issue in this case. But it’s possible that what we’re seeing here is an example of one of the drawbacks of having very strict selection criteria based largely on objective performance measures. Namely, that you might end up not selecting your best skier!

Having Fun and Getting Strong

Getting Strong and Having Fun at The Club