A while back I responded to a reader requesting that I look into any connections between a skier’s performance at World Juniors and subsequent medal winning.  My conclusions there tended toward the ambiguous, since 2-4 races (from World Juniors) just isn’t a whole lot of information.

But we can also just take medalists and look at how they’ve skied at different ages.  It’s very important to remember that this is inherently one sided: we’re ignoring all sorts of skiers who might have skied just as fast as these medalists at a young age but never won a medal.  If you’re a math geek you’ll recognize this as a distinction between a necessary and a sufficient condition.

I grabbed all the Olympic and World Champs distance medalists since the 2001-2002 season and plotted all of their FIS points (from every race I have): 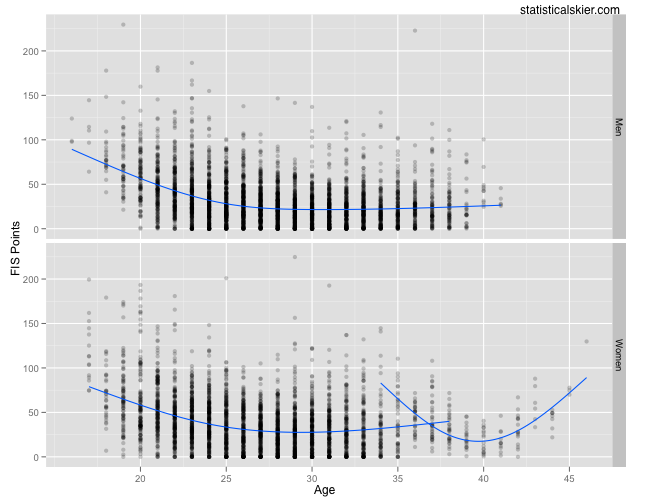 What’s with the third trend line, you ask?  Well, as usual, Hilde Pedersen deserves her own category.  The (non-Hilde Pedersen) trend lines are averaging over skiers and also over all of each skiers results at each age.  So while this does tell us that fast skiers can, on occasion, ski slowly (at every age), maybe it’s a bit too cluttered.

Instead, let’s go back and grab each athletes best result at each age: 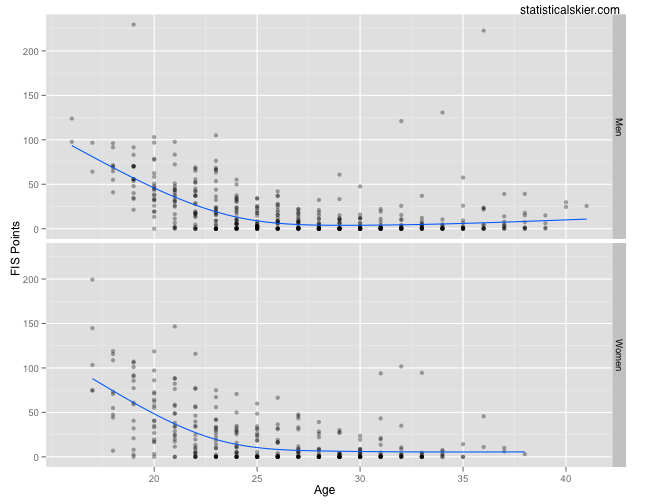 Some future medalists were topping out above 50 FIS points before age 25, but not many.  Both trend lines dip below 25 FIS points by age 23.

In some ways, this kind of analysis is dangerous because it would be irresponsible based on this data to imply that if you haven’t achieved a sub-25 FIS point result by age 25 you’re unlikely to win a medal.  (Tempting, but irresponsible.)  What I do like about being concrete like this is that it can provide younger athletes with some concrete goals based on fast skiers who’ve come before them.  Namely, shooting for a sub-25 FIS point result.