Continuing with my series of posts looking at some split time data (kindly provided by Jan at WorldOfXC.com), we turn to identifying some folks who tend to ski better (as measured by their % behind the leaders) towards the end of a race than the beginning.

I actually fit a model on this one (gasp!) rather than just exploring the data and making a graph. So after a little bit of fun with some linear mixed effects models, here are the 12 skiers with the strongest tendency to ski closer to the leaders as the race progresses: 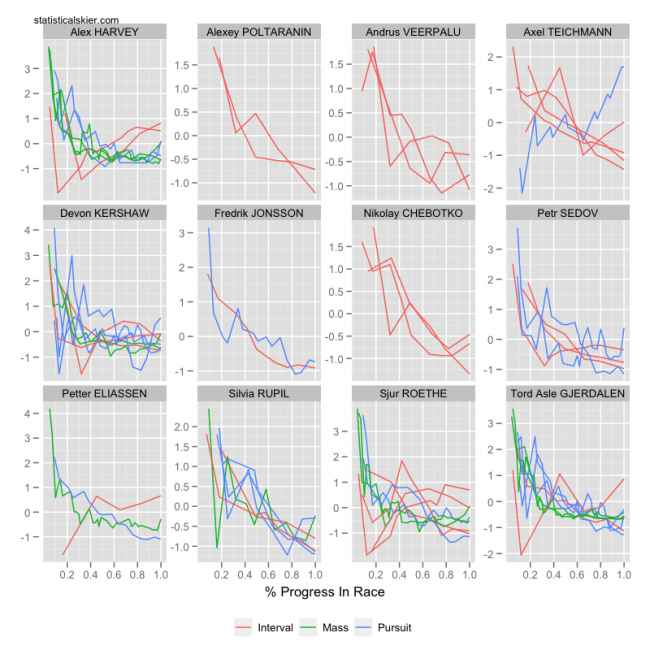 Once again, you can click through for a slightly larger version, and the y axis is a highly adjusted measure based on percent back relative to that skier in that race. You can go back and check some of my previous posts using this data for a more detailed explanation of what I’m measuring on the y axis. The basic story is that it’s a relative measure for each skier. So the actual numbers don’t signify anything across athletes, just the overall trends.

You’ll notice that several folks here appear to be dramatically further behind the leaders early in mass start and pursuit races. This is in part a function of how these races play out. Early on, there will often be a very large pack of skiers. If someone, say Alex Harvey, is just sitting comfortably mid pack, at 1-2k into the race he might be as much as 5-10 seconds behind the “leaders” just because the pack is so large and moving so slowly. That can easily translate into a fairly large % back given the small amount of time that has passed.

Teichmann’s tendency to pick up the pace during a race is fairly well known (my benchmark here being that even I know about that one!). But maybe some of the other’s are a bit of a surprise to some folks…