The obvious follow-up from the last entry in this series is to look at the folks who have the strongest tendency to fall further behind the leaders as the race progresses. Not surprisingly, this group will include a lot of the more marginal skiers from smaller skiing nations. I did filter out people for whom I only had data from one race. 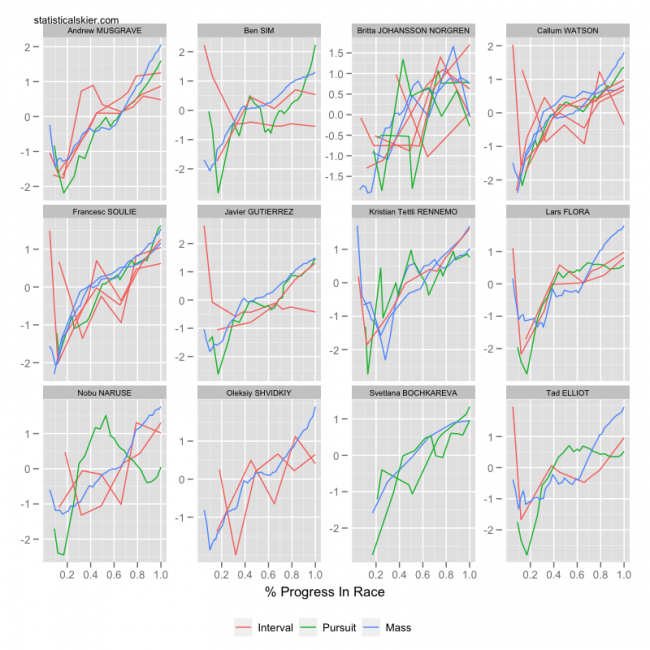 So keep in mind that fading later in races doesn’t always mean you finished poorly. It just means that you’re considerably further behind the leaders at the end of the race than you were at the beginning. (And check out any of my previous posts using this data for a more detailed description of how to interpret these graphs.)

We covered American Lars Flora earlier, noting that he had some health issues during his stint in Europe and so he had a series of tough races over there. Britta Johansson Norgren is one of the more notable skiers to be included in this group. Recall that fading further behind the leaders in a women’s WC mass start or pursuit race was not entirely uncommon last season. But Norgren saw a bit of the same pattern in interval start races as well, which pushed her down the list a bit.

Kristian Tettli Rennemo is a Norwegian I’m not very familiar with, but a quick glance at his results seems to suggest he’s fairly talented. At least, he’s got quite a few WC starts under his belt. Nothing spectacular, but some strong results in Scandinavian Cup and other FIS races.

Race For The Cure