I haven’t done one of these in a while, but with Mika Myllylae in the news recently I thought this might be fun…

This head-to-head matchup might not be the first you’d think of to look at, but you end up with an interesting graph nonetheless.  As always, I grabbed the 54 races where Myllylae (FIN) and Alsgaard (NOR) raced against each other directly in WC, OWG or WSC races.  Since these guys are both largely pre-sprinting era skiers, we’ll only look at distance races.

Then we simply plot the difference in FIS points between the skiers: 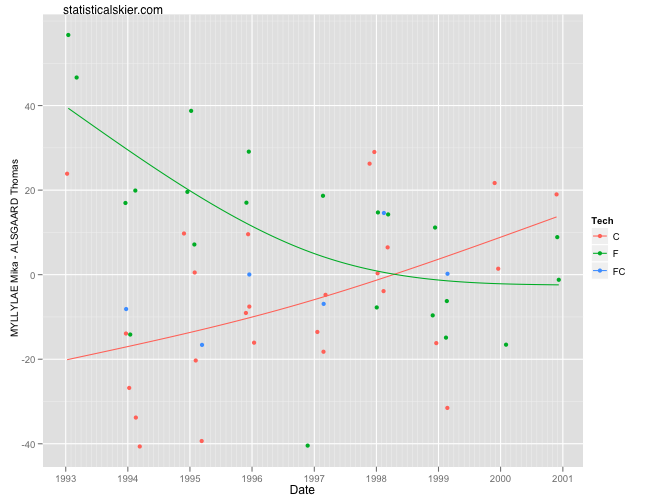 But then they each significantly improved their weak techniques (since it doesn’t make much sense that they would both get worse at they better techniques) until they reached some level of parity by the end of the decade.  The actual reversal of the trend lines here is somewhat misleading, most likely an artifact of the small number of races in 2000 and 2001.

Just another reason to be an XC skier in Alaska!