This past week Laura, Leslie and I hosted a PNSA junior training camp for five days here in the Methow. This was the last of the three PNSA camps for the kids this season and I thought it’d be important to pay a lot of focus to base training and technique, adding in a bit of speed and strength for variety. After a long rollerski Wednesday evening, we hit the track on Thursday at 8am. 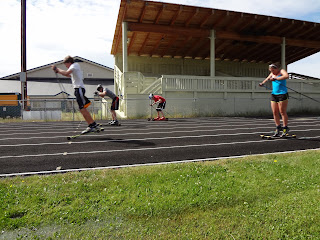 Gareth Hardwick getting up and forward like a real pro

The athletes have really taken to the variety-show track workout that I’ve been putting them through all summer. We keep it interesting with a mixture of sprint starts and longer speeds, agility course trials (both individual and head-to-head), and explosive foot exercises like double-footed hurdle jumps and uphill frog hops. By the end of the workout they should feel like they worked their muscles but not their aerobic capacity. This is a good thing, because after the track workout we loaded everyone into vans and headed up to Foggy Dew trailhead for the 8mile hike into Sunrise Lake, our camping base for the next two nights. 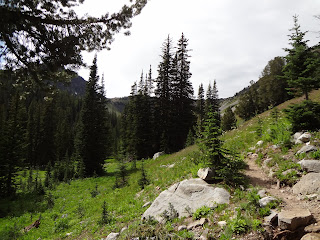 Entering Merchant’s Basin at the edge of the Sawtooth Wilderness; Sunrise Lake is a hanging valley on the left side of the basin
We settled in for the evening with some tasty cutthroat trout from the lake and Nalgenes filled with hot Endurolytes Fizz, a new and fun use for my favorite Hammer product. It’s like hot Tang, but better for you. The next morning we all readied ourselves for adventure. I took the older group and headed out for what would become a 4.5 hour run/scramble around Cooney Lake, the Navarre valley and a no-name peak we rallied to the top of on a side-trip. 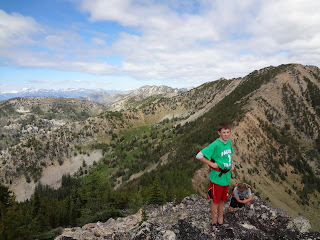 Cole Christman at the top of an unnamed, 7800ft boulder pile. Our camp is on the other side of the background ridgeline.
Aside from a few dehydration/food bonk issues, we all made it back to camp in one piece with little blood spilled, in time to rest up and slam some two-day old bagel sandwiches before launching into a core strength workout on the grass. This entire backpacking portion of the camp was modeled after the Methow camps of old, when Laura and Flash would run all of us youngsters into the ground with long ODs and getting-lost epics. It was a treat for once to be on the other side of the equation…

After returning back to civilization on Saturday we tore through a vigorous game of soccer and some delicious grilled chicken and tabouli from Lotty Ekblad, then got a good night’s sleep before waking up to a 6km uphill skate TT on Sunday. And then, 15-20 hours of training later everyone went home, tired and (hopefully) happy. It’s a great thing, to be able to transfer personal knowledge and experience of training into coaching to help younger athletes reach their own peak of performance. That, I suppose, is how our little podunk sport still manages to churn out world-class competitors.

A Week In Photos