I’ve talked a little before about race penalties.  Since race penalties are specifically intended to adjust for the strength of the field, I thought it would interesting to think up some way to see how well they do that.

If FIS points work as advertised, this should generally be the case.  Of course, no system is perfect, but we should at least expect a reasonable correlation.  Is that what we get?  Let’s see…

It turns out that this happens fairly rarely, or at least less than you might think.  How often?  Well, generally we see around 20-25 women and 30-35 men each season.  But oftentimes, these skiers will have done only one World Cup, or conversely only one OPA/SC.  For the time being, I’m going to ignore this paucity of data and push forward.

Then I took the median FIS points score in each category for each skier/season combination.  The idea being that these two values should (roughly) match up if FIS points are working as they should.  Let’s check the graph… 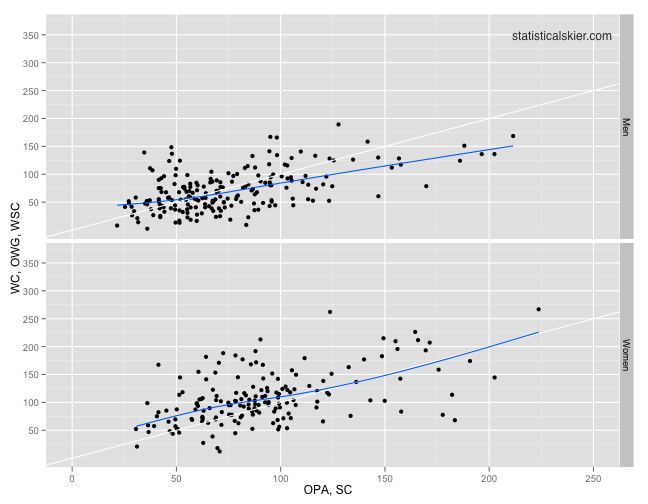 An absolutely perfect relationship would lie exactly on the diagonal white line.  The blue lines are (non-linear) trend lines.

We could go one of two ways in interpreting this graph:

(a) There does appear to be a correlation that (roughly) tracks the hypothesized relationship, so maybe things aren’t all bad.

(b) The variability in this relationship can swing as high as 50-100 points!  That’s so huge as to make any correlation we see essentially meaningless.  Additionally, the correlation for men appears noticeably less than one, and something hinky is going on with women who score low points in OPA and SC races.

Like everything else in statistics that ends up being suitably ambiguous, I’d say both are accurate descriptions of reality.  There certainly is a correlation.  The fact that the points vary quite a lot above and below the blue trend lines is hardly surprising given the potential sources for error here: I’m taking medians of very small numbers of races, even just one sometimes!  Fast World Cup skiers might on occasion do an OPA Cup while recovering from illness or injury and not really be at full form.  I’m sure you can think of more…

Still, I think the general message here is that the FIS points you get (at least in an OPA or SC race) are, on average<1, at least a reasonable indication of what you’d get in a World Cup race.