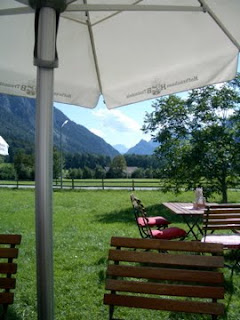 Greetings from SUNNY Bavaria! The first week of the Europe camp has flown by, and though the weather is always a worry, Ruhpolding has been cooperating fully by giving us bright, sunny days and thundering only at night. It’s been a great start!

So far, the team has been spending a lot of time on the roller loop at the Chiemgau Arena (where this season’s World Championships will be held) and running, biking and rollerskiing all around the Ruhpolding area. Thursday, we went on a 5 hour long bike/kayak excursion that took us into Austria and then over to the famed Chiemsee Lake before we circled back for delicious lunch. 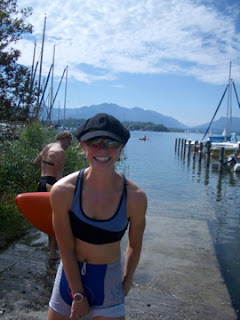 Annelies getting ready for the kayak section of our adventure. 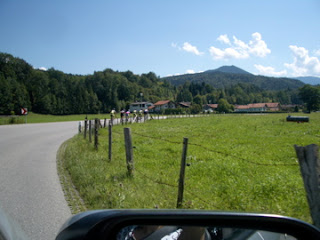 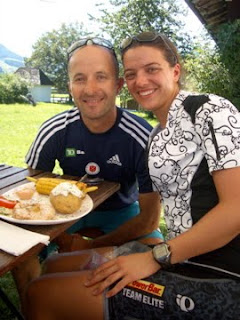 Enjoying a well-earned Bavarian lunch post-bike!
Yesterday, after some technique combo work, we ran from the venue through a beautiful valley, ending at a ski resort hut where we had a quick snack while taking in the view before driving back to our hotel. This is an amazing place to train, not only because the people seem to think biathlon practice is a spectator event (it’s amazing how many people are in the stands just to watch us do L1 combos…and of course by “us” I mean Andrea Henkel and Magdalena Neuner), but also because of the sheer number of trails and roads just out the door for running and biking. It’s no wonder Germans excel at many sports – the atmosphere is just so conducive! 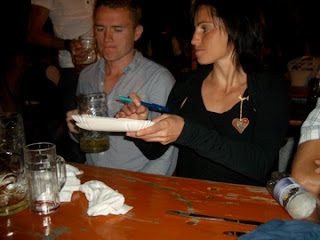 Andrea Henkel signing autographs while out at dinner.

This coming week will be our last in Ruhpolding. It will be a big week, including a time trial with the Italian, Slovenian, German B team, and Russian teams, and a much smaller hill climb time trial at the end of the week. It will be interesting to see how things shake out! Then off to Oberhof for some skiing in the ski tunnel there. It should be a great couple weeks!

Justin Shares His Experiences and Strength.